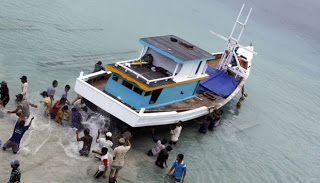 One day a pilolog Bugis, Doctoral Nurhayati Rahman, opened the library closet and grabbed a book of ancient literature Bugis La Galigo. He read a verse about the oral tradition of the Bugis boat philosophical: "If you are having difficulties at sea, then palingkanlah boat to the right seven times. If it had not given way, palingkanlah boat to the left of seven times. If that was not given path, then you take trouble. Meaningful descriptions that accompany the trip in a boat that was speeding down the middle of the ocean. The boat and the sea is indeed a major part of philosophy, behavior, and everyday citizens Bugis and the tribes on the island of Sulawesi. They are not only known as a tough sailor or a skilled fisherman. But, also as a maker of wooden boats that are reliable. And of course with traditional technology. The conclusion was not only recorded in ancient manuscripts La Galigo, but also in real evidence shown boat makers in Bulukumba, South Sulawesi. In the coastal village of Tana Beru, Bulukumba, Baso Muslim Hajj is known as a reliable boat maker. One morning he was with the courtier and his Sahi preparing to launch a boat engine to sea. Boat owned by the World Wildlife Protection Agency or the WWF it was his work over the last two months. And now the "baby" is getting ready to be presented to the natural world. A baby would be born to earth. And the Muslim Hajj Baso is "mother" the red baby who was getting ready to start a new life in nature mortal. For the citizens of the Bugis, boat makers could be likened to a mother with a boat as a baby. Because between them is not only bound in a relationship maker and an inanimate object. But deep in the well established a strong bond nan. Like the mother and the baby. Because of that, when the Sahi work hard off the boat to sea, the Muslim Hajj baso also feel the blend of joy and compassion as a mother who was giving birth. He is one of the leading boat maker in the village of Tana Beru, Bulukumba, South Sulawesi. He is the designer and supervisor each making a boat or a courtier. While executing the design is the Sahi or builder. Sea and is a life boat and Bugis tribes in the Celebes Sea, the old name of Sulawesi. Because the philosophy, attitudes and ways of thinking they are generally always associated with the sea and boats. The linkage was so evident in the exposure codex Bugis La Galigo. Unravel the exact time travel story Sawerigading to the Land of China or China with a large boat. The codex is described as well as large boats bringing people and plants. Arguably, the Bugis people have their own technique in making the boat. Ritual is the first step prior to the felling of trees to make a boat hull or kalabiseang. Afterwards, the Sahi grabbed his tool and smooth the keel boat in the shipyard called bantilang. 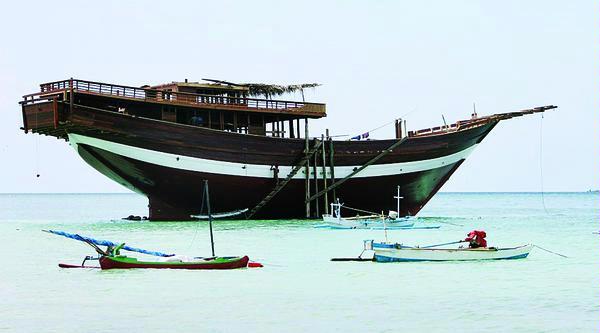 phinisi boat tanahberu
After the keel boat or kalabiseang is refined, the Sahi also placed two boats in the barn cantilever tip and tail boat called sotting. Next hull boat or boat fitted skin, forming a boat. This difference Bugis boat building than a modern boat. This is because the Bugis boat is made by first making the stomach, after which the new case. It is clearly different from the modern boat building first contrived a new chassis and hull. For the Muslim Hajj Baso, traditional techniques provide advantages in the use of raw materials. Therefore, the skin can be formed according to the design of the boat without a lot of wood waste. And long before the work Sahi, Haji Muslim Baso as a retainer will design and production plans into account. Well, based on that count, he can estimate the raw material needs, length of employment / number of Sahi and production costs. Results count is then used as a benchmark price and presented to customers by the local residents called sambalu. Buginese Boat has a long record in the life of the tribes on the island of Sulawesi. A number of archaeologists noted, traditional industries have been started since the reign of the Kingdom of Gowa or hundreds of years ago. And when opening the back pages of the papyrus codex La Galigo, that time is in the seventh century, or at least a XII century AD. The Bugis people from the village of Ara in the region Bulukumba, often also called Ara person listed as the Bugis boat makers are skilled. They not only make the boat to find fish or bernelayan needs, but also for transportation. In fact, a big boat to trade, such as the dilakoni Sawerigading yore. Because of this, the Bugis boat has many varieties and sizes. From large to small. Uniquely, the boats have a distinctive name, such Pajjala, Banggo or Sandek. Later, type Phinisi more so-called typical Bugis boat. Beyond the historical record and philosophical messages, tribal bugis and also other tribes on the island of Sulawesi, known to be close to the myth. In fact, the skills to make the boat people in this Bulukumba region is often associated with myth. Sahibul saga, when the boats were destroyed in the waters belonging Sawerigading Tanjung Bira, Bulukumba, the screen is stranded on the island of Bira. While flake hull boat stranded in the village of Ara. In the end, Tanjung Bira became the birthplace of the sailors are tough. And until recently, the sailors from Tanjung Bira has spread almost to the entire archipelago. While the village of Ara become village birth skilled boat makers. Proved up to now along the coast Tana Beru, Bulukumba, still enlivened by a variety of boat building activity. They serve orders not only from domestic but also overseas. Muslim Hajj Baso actually comes from the village of Ara. However, during the last twenty years, he was actually residing in the village of Tana Beru. There, he learned to make the boat since the age of 16 years. And at the age of 21 years, he has been able to be a retainer of a boat building. No wonder, if this time he did not know the exact number of boats that have been finished. That light, he has a lot to make the boat to a stranger. As a result Bugis boat also has spread to other countries as the porters boat or tour boat. Similarly, at this time. Motor boat that was dilarungkan into the sea that was the order of a non-governmental organizations (NGOs), foreigner. He and his sahinya make the boat since six months ago. The story of greatness with shipping Sawerigading Bugis Bugis boats such as exposure in the codex La Galigo proved not merely fiction. You see, anyone can now see the legacy of expertise and skills handed down by their ancestors Bugis in Tana Beru, Bulukumba. Apart from pride, the Bugis people actually read the ancient literature of exposure in La Galigo. Especially those dealing with marine symbols boat as the teaching of life. Exactly like the Bugis philosophy of life. Finally, "the baby" was born into the world, while accompanied by tug relieved breath "mother". This means a Bugis boat has been in the high seas. So the duty of the retainer and the sahi ended. Struggle for about six months along with a three-day process pelarungan seemed full paid. Ie, it float Bugis boat. So, the story of the Bugis boat maker ends with joy. And once again the Muslim Hajj Baso established himself as one of the Bugis people. And not only skillfully made the traditional boat, he also managed to prove the greatness of his ancestors who have a long history in the sea. Source : www.phinisi-boat.tk
Konten Terkait