Someone who loves the diversity of cultures, enjoys to observe dynamic of politics, and learns from outstanding people with notable achievements. Dreaming of exploring the beauty of world with any uniqueness in any part of it. 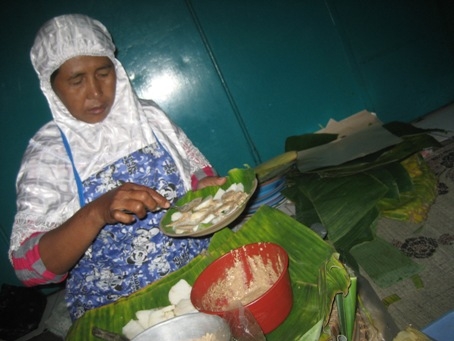 [caption id="attachment_99783" align="aligncenter" width="454" caption="Cabuk Rambak, a unique simple taste from Solo. Photo by Sonny Hendrawan Saputra"][/caption] I was very happy when my friend from Semarang, Buna Rizal came to Solo. He just finished travelling from Botswana, South Africa and United States of America. So I think it was good time for him to return back his sense of Indonesian tradition. I took him for travelling all over Solo. I and my Solo colleague, Aditya Darmasurya started the journey over Solo by taking him going around to pass the main street, Slamet Riyadi and told him the information of some several spots there including Loji Gandrung (House of Love) - the official residence of Solo Mayor Joko Widodo, Sriwedari Garden - the historical cultural public place, and Gladag Langen Bongan/ Galabo, the center of street vendors with more 70 choices of traditional menus. At 3 am, in the middle of exploring Solo, I was hungry, Aditya as well. But, I assumed that Buna was not really enthusiastic to eat. I think maybe it was not his habit to eat in the middle of the night if it is not for fasting purpose. But I could see that he was curious about "Cabuk Rambak", the menu that I offered. He had not eaten even seen it before.  After going around and finding many choices of cabuk rambak sellers, we finally decided to choose to buy it in Kratonan area, in Yos Sudarso street, southern part from Slamet Riyadi street. [caption id="attachment_99785" align="aligncenter" width="454" caption="Cabuk rambak seller in Kratonan area. Photo by Sonny Hendrawan Saputra"][/caption] Cabuk rambak is originally from Solo City. It is the traditional menu as Solonese have "Nasi Liwet" . Most people who sell cabuk rambak also sell nasi liwet. In Solo, the area having many cabuk rambak sellers in the middle of the night is along Yos Sudarso street to Solo Baru. There are also some sellers in Pasar Kliwon, the "Arabic village" in Solo and the most famous area to find it is in Keprabon, the area near Pura Mangkunegaran. Keprabon area is more touristy place since it has more comfortable space like traditional restaurant (thought still without chairs) and the view is more alive since it is in the centre area of Solo. However if you are backpacker or more adventurous traveller, I suggest you to go to Yos Sudarso Street until Solo Baru.   The current price today is about IDR 2,000 - 3,000 per portion. It is very cheap for Solonese and Indonesian people in general. So what is cabuk rambak? Cabuk rambak has three main compsition: [caption id="attachment_99784" align="aligncenter" width="454" caption="Two for three main compositions of cabuk rambak: ketupat and cabuk. Photo by Sonny Hendrawan Saputra"] 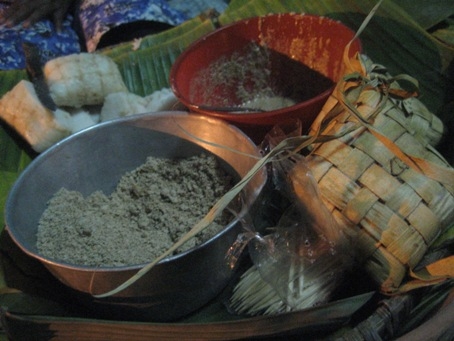 13019535331755536417
[/caption] 1. Ketupat Ketupat is the rice which is cooked by boiling the rice which is covered by young coconut leaf.  The leaf creates certain aromatic taste, not strong but typical. Ketupat is cut into slices and per portion we will get around ten slices. 2. Cabuk Cabuk is the sauce which is poured to ketupat slices. It is made by the combination of garlic, lime leaves, palm sugar, chilli, and salt. Those ingredients are crushed and blended together with sesame grated coconut that have been fried separately before. Then, the dried composition is diluted with water to make it into sauce form. 3. Rambak Actually for Indonesian, rambak more refers to the food made from the skin of cow. In cabuk rambak menu, food that is called rambak is actually karak, kind of rice cracker which is very popular in Solo besides kerupuk.  I have not found the cultural or historical reason why karak in this menu is called as rambak. In addition, I also never find this menu with the real rambak though I have eaten it many times in many places in Solo. Cabuk rambak is served in pincuk (banana leaf) that can really create traditional sense with sense of village modest atmosphere for most people who eat it. Even for some Solonese, it will bring their past memory when every morning cabuk rambak seller come door to door in kampong. The seller was always lady with simple natural bun, modest kebaya (Javanese clothes for woman), and batik to cover lower part of body. Personaly, I will also never forget cabuk rambak seller who came to my house when I was kid. The very old lady who is very humble and friendly to all her customers. ....and how about the taste? as I write in title, the taste is unique and simple. I say unique and simple because when you eat it you will not feel strong taste as many other typical Indonesian food. It is because of simple ingredients which are used to make it. Some people give opinion that the taste of the sauce is like melted cracker. Its performance is also very simple; it does not have many ornaments and colourful appearance. When can we buy it? Generally we can conclude that there are two main shifts of cabuk rambak sellers, just like nasi liwet seller. 1. From evening until dawn a. In Keprabon area is about from 6/7 pm to 2/3 am b. In Kratonan and Pasar Kliwon area are about from 9/10 pm to 4/5 am 2. Morning only In Manahan area especially on Sunday and in most of kampongs are about from 4 am to 10 am [caption id="attachment_99787" align="aligncenter" width="289" caption="Cabuk rambak seller in front of Masjid Agung Surakarta during Sekaten celebration. Photo by Sonny Hendrawan Saputra"] 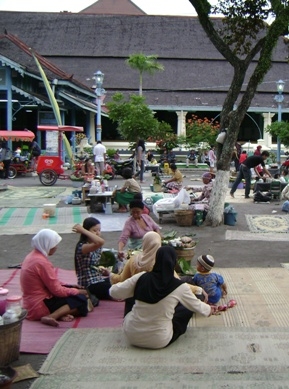 13019540241795561970
[/caption] During Sekaten celebration, Keraton's tradition in every Rabiul Awal month in Islamic lunaric calendar, we can see so many sellers of cabuk rambak from morning to evening in front of Masjid Agung Surakarta. Back to my own story, after one hour in that cabuk rambak place to enjoy eating in the serenity of Solo in the middle of the night and to have some little conversation, we decided to go back and brought Buna back to Sebelas Maret University's dormitory where he would sleep for a night. I and Aditya wished Buna, as our guest, happy and impressed by that Solo night exploration. Of course, I also wish you after reading my article to have more interest to come to Solo city and absolutely to try the unique simple taste of cabuk rambak. See you there soon. [caption id="attachment_99786" align="aligncenter" width="454" caption="Cabuk rambak is traditional food from Solo. Photo by Sonny Hendrawan Saputra"] 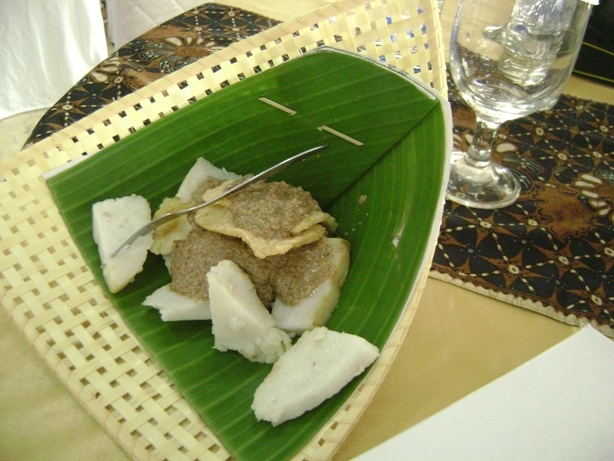