When most I wink, then do mine eyes best see. 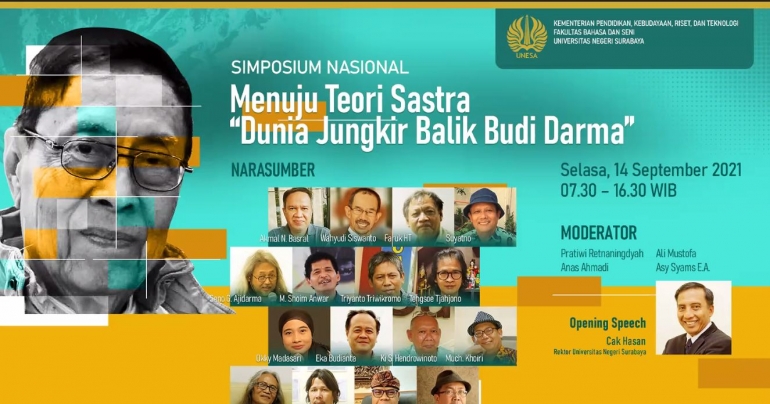 Not so long ago we heard the sad news of how we had lost a renowned writer and professor at the State University of Surabaya, Prof. Dr. H. Budi Darma, M.A, pH.D., who was known as a writer who wrote various short stories, novels, and essays. His passing not only saddened the family of the State University of Surabaya, but also the entire family of Indonesian Literature.

Budi Darma is one of the most influential writers in the development of Indonesian literature. Identical to absurd and satirical works, his famous works include a collection of short stories, Orang-orang Bloomington (1980), Olenka (1983) dan Raflus (1988), Ny. Talis (1996). Since his passing, there are not enough words in the world to express the sorrow and sadness that his absence has left for his family and the people that were around him. His lasting legacy will not only be the literary works he gave to us all but his unselfish efforts to cares and always motivates others.

In remembrance of Prof. Budi Darma and his works, the Faculty of Languages and Arts (FBS), State University of Surabaya (UNESA) held a symposium titled: "Simposium Nasional: Menuju Teori Sastra 'Dunia Jungkir Balik' Budi Darma", along with 16 experts, from both practitioners and academics, as speakers to re-examine Budi Darma's literary theory virtually on Tuesday, September 14, 2021, from 7 AM until 4 PM through Zoom platform.

The event was divided into four sessions with various discussants who would share their different perspectives on Budi Darma's works. The speakers were chosen for their expertise and closeness to Budi Darma. The first session's speakers of the National Symposium were Faruk H.T., Seno Gumira Ajidarma, Okky Puspa Madasari, and Suyatno.

The number of registrants for this event is quite large and moreover many of the participants are from well-known institutions. The participants who joined the symposium were more than 1.000 participants from various regions in Indonesia, some even from Malaysia.

Below is a response from one of the participants of the Simposium Nasional: Menuju Teori Sastra 'Dunia Jungkir Balik' Budi Darma, Agita Nurul, an English Literature student, shared her experience and her thoughts about the symposium, "I join in the first and second sessions, Mr. Seno and Mr. Faruq gave interesting perspectives towards Prof. Budi Darma's works," said her, who had known Mr. Seno since high school.

Agita added that she wants to know how the literary criticism is conveyed by other literary figures or writers regarding the works of Prof. Budi Darma and hear some of their points of view especially toward the theory of 'Dunia Jungkir Balik' that is found in Prof. Budi Darma's works.

She further noted that from the symposium, the word 'Jungkir Balik' itself explains how the creative process and the writing style of Prof. Budi Darma in creating characters that flow through the story and characters in an all-open absurd world.

So, in this absurd world, there are unique things that can be made into remarkable work depending on how sensitive we are seeing the environment around us and how capable we are to observe our society and life, so that we can then use it as a theme to make a story like what Mr. Seno called as 'Tema Siap Pakai'.

Besides, she concluded that writing actually does not require preparation, which means that writing should not be made complicated. If you get inspiration or something interesting, just immediately write and share your idea in your works, just like what Prof. Budi Darma did. 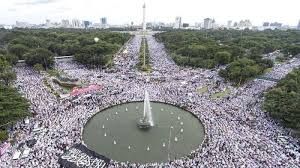 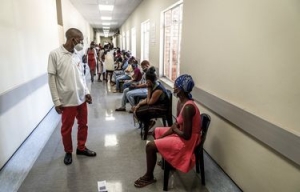