Wealth and Mental Health: The Economics of Happiness 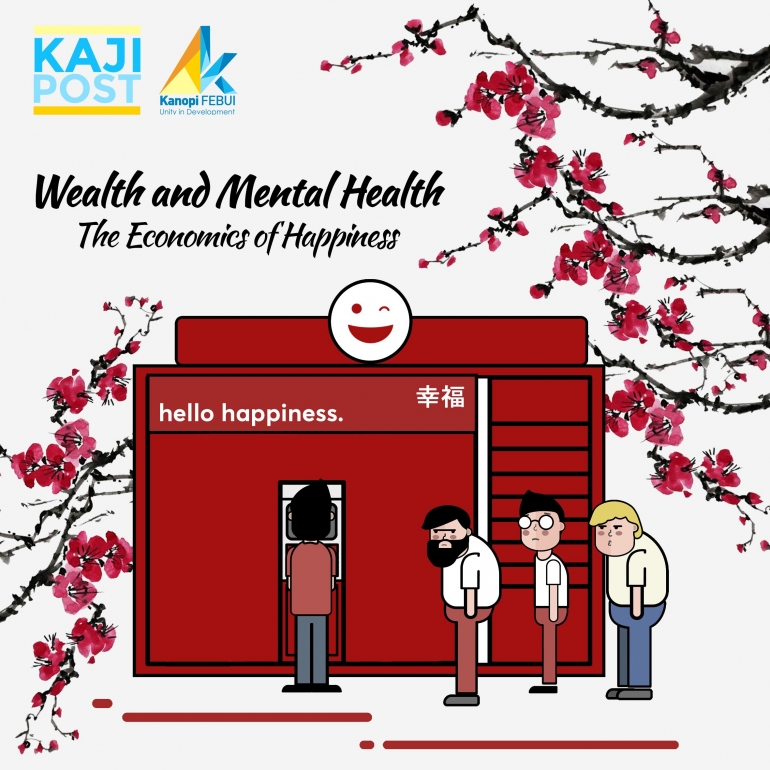 Gregory Mankiw stated in his book Principles of Economics that rational people will always do their best to achieve their objectives. While a person's objectives may differ from those of their peers, they have the same sole purpose of fulfilling their needs. In order to do that, a person needs to possess the required resources. If a person is able to fulfill his most basic needs (i.e. clothing, food, shelter) and still has abundant resources to be allocated to tend his less essential needs, they are what the society perceives as a wealthy person. As there are different kinds of resources available to a person, we will focus on one that is relatively easy to analzse from a macro lens, which is money. Therefore, we shall define wealth as the possession of a large sum of money hereinafter.

Wealth is often associated with the well-being of a person, more specifically their health. The wealthier a person is, the higher is the chance of them being healthy. For instance, a wealthy person can buy food at higher prices. Usually, these high prices indicate that the food is chosen carefully, hygienically processed, and well-served or preserved. Wealthy people in general also have more access to health facilities such as hospitals and gyms compared to those who are less privileged.

With that being said, let us not forget that health is not only what meets the eye or physical health. A person must also pay attention to the condition of their mind and emotions, called mental health. One of the indicators of a person being in a good mental health state is the absence of suicidal tendencies. To prove---or disprove---the popular perspective of the relationship between the two variables, let us now see the paradox of wealth and mental health that is evident in high-income countries with high annual suicide rates, namely Japan and the Republic of Korea (henceforth mentioned as South Korea).

In 2015, Japan recorded a Gross National Income (GNI) per capita of $38,880.00---placing 27th in the world---while South Korea placed 33rd with GNI per capita that amounted to $27,250.00. Albeit not entering the top 20, these East Asian economies were still classified as high-income countries by the World Bank.

Throughout the following years---and prior to 2015, these two developed economies of East Asia remain consistent in attaining both the high numbers of GNI per capita and rate of suicide; though admittedly there have been some changes regarding the placements among countries in the world. Despite having such high GNI per capita, we cannot overlook the suicide rates of both countries in estimating the well-being of their residents.

Literature from earlier years show that suicide as a phenomenon has been viewed as a coin that has two sides to it: sociology and economics. The publication of the study of suicide and its correlation with sociological factors dates back to as early as 1897. Durkheim, the sociologist, predicted that lower levels of social integration and social regulation lead to a higher level of the suicide rate. Social integration represents how engaged an individual is to the collective life of the society in which he lives. If an individual's social integration is high, they actively participate in social activities and their will to live is strengthened.

The effect that social integration has on suicide is similar to the effect imposed by social regulation. An individual internalizes common beliefs and practices about their needs and satisfaction that are regulated by the society they live in. When their regulation is upset by serious readjustments in social order, whether it brings sudden growth or painful crisis, an individual's tendency to self-destruct rises. Durkheim mentioned that religion is one of the regulating forces in societies. In times of economic uncertainties, religion may console the poor and teach contentment to the rich.

Approximately a century after Durkheim's Le suicide was published, economists Hamermesh and Soss argued in their study that suicide actually involves individual decision making and economic factors. The economists found that the rate of suicide increases with age and unemployment; also that suicide rate is inversely related to permanent income but that the marginal effect on suicide declines as permanent income increases.