Why is The AA Couple's Luxury Wedding Reaping a Lot of Controversy? Check This out! 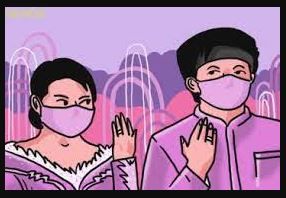 Recently, Indonesian society is being enlivened by the wedding of a famous celebrity and youtuber in Asia.  I'm sure almost all of you already know, right?  Yeps!  The wedding of Atta Halilintar and Aurel Hermansyah.  The couple's wedding, which is often nicknamed the "AA Couple", was held on April 3, 2021 and is known as the most luxurious wedding party in this year.  Lots of other celebrities attended this AA Couple wedding and there were even several state officials who were invited, and one of them is the number one person in Indonesia, namely President Joko Widodo. Many prayers and congratulations continue to flow from fellow celebrities to this AA Couple.  In addition, not a few people also prayed for this couple to always be happy, stay lasting and romantic, and get a baby soon.  However, behind all the luxury of this wedding, it also creates a lot of controversy among today's society.  Lots of people have criticized and commented on AA Copule's marriage with various arguments.  Here are the reasons why this wedding is so controversial.

First, because of the arrival of President Jokowi himself as well as the Minister of Defense, Prabowo Subianto.  The presence of Jokowi and Prabowo is considered to be the inconsistency of the leaders in pandemic conditions.  Currently the government is voicing and making regulations so that people do not crowd and hold any party, but instead the leaders themselves violate these regulations. As reported by CNN Indonesia, according to an Epidemiologist from the University of Indonesia, Hermawan Saputra, he said that Jokowi and Prabowo were not wise and insensitive even though Atta and Aurel's wedding was considered to have implemented strict health protocols.  For him, the presence of these two figures can trigger the public's desire to increasingly hold a wedding party.  The presence of these two figures will actually make a new shield for the community when they want to hold a party by giving the excuse that they have strictly followed health protocols.  It could be that this will make people think that "The President and the Minister of Defense are allowed to attend the wedding, why can't we?".

Othe reason is many people were surprised and questioned the existence of a post on the official Twitter account of the Indonesian State Secretariat Ministry that uploaded the AA Couple's wedding photo.  Netizens also flocked to the Twitter reply column from that account.  Many netizens have questioned what the urgency of the wedding party is related to state affairs.  The public questioned how this official account of the Ministry of State Secretariat of Indonesia thought to posting things that were not related to constitutional matters.  So, many people think that this wedding party has become one of the country's agenda that must be done.  Meanwhile, this wedding party itself has nothing to do with state affairs.

A public policy observer, Trubus Rahadiansyah, also commented on this. Reporting from Tempo.co, Trubus questioned the reason the State Secretariat ministry shared news regarding the presence of Jokowi and Prabowo at this celebrity wedding reception. He said that there was no urgency in the presence of these two figures at the wedding party which needed to be broadcast by the State Secretary's account.  He also said that what the Secretary of State had done was clearly not in its place and function.  Even Trubus considered it unethical because it was not related to state matters.

And the last thing is that many people feel the injustice committed by the government.  Many people are disappointed with the government which has created social inequalities.  The government has made a regulation in the form of prohibiting the community if it invites many people and if there is a violation of health protocols in holding a wedding party will get sanctions.  So, lately it often happens in society when they hold a wedding party, they are often forcibly dispersed by the security forces even being criminalized because they are considered to have violated health protocols..

However, the existence of celebrity weddings attended by state officials has finally become a paradox in society.  Where society considers when famous people and people in power can carry out a wedding party at will without any pressure from any party and without being touched on the problem of violating health protocols.  This is what makes people angry and disappointed because this injustice is being demonstrated.

Therefore, because of the large number of people who criticized this couple's wedding, the AA Couple's wedding became a hot topic at the beginning of this month.  Because many people were furious at the paradox that occurred at this wedding, netizens responded with harsh criticism, satire and seemed to make fun of it.  Many people hope that this incident does not happen again.  In addition, the community also hopes that the government must maintain the consistency that has been made.  The laws and regulations that are made must be equal to everyone regardless of their status.  And as the holder of power in the country, the community hopes that the government can be a good example for its citizens and don't even break the rules they have made.

Anyone Can Be A Hero: Pengalaman Pertama Donor Darah yang Menyenangkan