Trump Has Failed To Become America Leader, He is King Of Racism 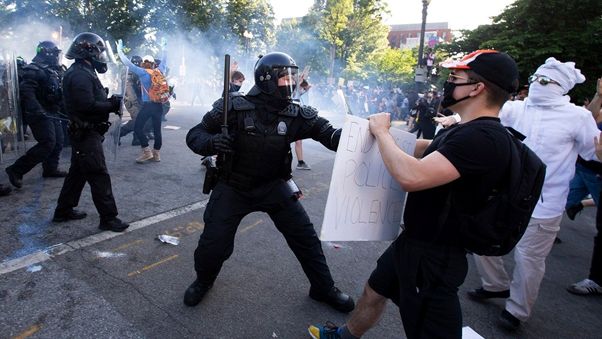 Kompasiana, New York-Trump has failed to become a leader over the death of George Floyd sparked dissatisfaction in 50 states of the United States (US) which is still ongoing today. The cover of TIME Magazine, racist Hitler-style racist satire. President Donald Trump remains a big threat to democracy. That pattern will continue to make dominance in the hands of the trump as the most powerful person in America. The people who have interests and hold the most important positions are also racists.

The term 'racism' was coined in the 1930s, primarily as a response to the Nazi project of making Germany judenrein, or 'clean of Jews'. The Nazis were in no doubt that Jews were a distinct race and posed a threat to the Aryan race to which authentic Germans supposedly belonged. Holocaust and other genocides are therefore to be regarded as unfortunate but inevitable episodes, varying in superficial ways but united by an essential similarity stemming from the very nature of humans as biological and cultural beings which live only in groups, are held together by common feelings of identity, and are thus impelled to maintain their collective identities.

To complicate matters even more, it is worth remembering that historically there has been an ambiguity surrounding Jewish 'whiteness' which still persists to some degree. As we will see, the 'whiteness' of Jews, especially in the USA, as of the Italians and the Irish too, has actually been achieved in the 20th century as part of a social and political process of inclusion. As 'Semites', Jews were often regarded as not belonging to white races, while it was not uncommon in the 19th century for the English and Americans to regard the Irish as 'black', and for Italians to have an ambiguous status between white and black in the USA. So, today The protesters chanted, "I can't breathe", quoted from Floyd's last words when strangled with his knees. Racism in America has long been entrenched. In this country, those with black skin are often discriminated against.

But who is to count as 'black'? The history of US debates and legislation reveals consistent dif ﬁ culties in defining the black population. A famous 'one drop' rule was adopted in many Southern states, which implied that any black ancestry, however far back, was consigned individually to the wrong side of the white / black divide, determining (disadvantaging) where s / he could live, what kind of work was available, and whether marriage or even relationships could take place with a white partner. One drop of 'white blood', though, did not carry the same weight in defining racial status.

The most common cause of death in the US was the Corona Virus but now the cause of death is the feelings of the American people because America has not made justice and stopped behavior based on sentiment about self-identity concerning heredity, religion, nationality or ethnicity and class. Sensitive and span issues cause divisions and hostility. In the USA, of course, there are continuing examples of controversy over 'race' and racism, in different guises. In 2004, a long-standing member of the Senate, Trent Lotte, had to resign after publicly expressing nostalgia for a previous period of racial segregation. Two criminal trials found the population strongly divided on 'black / white' lines. Now history repeats itself by the racist king of the world.

Inevitably, therefore, the term 'racism' has also become subject to social forces and political conflict. The idea of race has been in retreat in the second half of the 20th century in the aftermath of the defeat of Nazism and discoveries in the science of genetics. Nowadays, there is a tendency to regard inter-communal hostilities as stemming from issues of culture rather than racial difference. Evidence, Trump is the best at making animosity compared to unity. Trump gave a loud statement and ordered the US military to destroy Iranian warships that were considered harassing. Trump ordered an investigation into Chinese companies listed on the US financial market. Trump broke up relations with WHO. Finally Trump accused blacks with antifa (anti-Facism).

The idea of racism is obviously closely tied to the concept of race, but it should be clear by now that the more one delves into the history of both notions, the more puzzling they turn out to be. Twitter is used by Trump for hateful comments about other people. When your heart is full of hatred, your brain and reason become inhuman. First the case of hate speech in America must stop. Second, Apply social equality between races and tribes. Third, national integration efforts must be carried out as closely as possible and carried out by every citizen with social justice. Finally, do not preserve the repressive politics of citizens both verbally in instruction and action.