suray an Mohon Tunggu... A Daddy of Two

"Take Off Your Hijab! This is Korea" 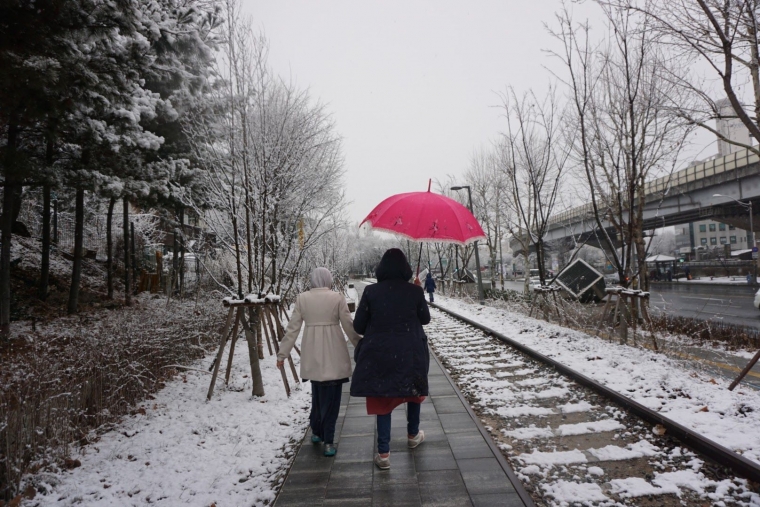 This is a piece of mind that I wrote back then during Winter 2018.

Yup, I may have started off this talk in a provocative way---for a good reason. Despite the fact that Korea has begun accepting and welcoming more and more diverse foreigners, there are still some homework need to be done---one of them dealing with an issue I am jotting down right here.

September 2017 was the second time my sister-in-law came to Korea for two weeks and I cannot forget what she told to my wife as she was about to leave Korea. "Sis, now I sense how hard it must've been for you. I don't know how you managed to be patient with all of the stare and glare of people around you."

As I learned more as to what she meant by that, I realized that during her two-week stay in Korea, she had been confronted with two different people at two different locations with the same message of asking her to leave Korea for wearing a hijab. She held back her tears as she recollected those gloomy moments as she has been an endearingly Korea lover.

As someone who has lived in Korea for 6 years, I cannot understand and believe that such happenstance still occur(ing?) in Korea. I live in Korea with my wife who also wears hijab and I could say that despite the fact that we are relatively being accepted for being who we are, I can relate to what my sister-in-law had experienced because my wife has had "rough" moments, too.

Indeed, wearing a hijab during scorching summer days in Korea has always been a tantalizing challenge for a Muslim woman like my wife. But, it is a completely different situation in winter. No one cares about her wearing a hijab! Interestingly, no one has ever asked, begged, or even forced her to remove her hijab in winter like what she (almost always) has experienced during summer days.

This is the reason as to why this particular happenstance (?) has always intrigued me---being her husband. I could not forget the summer days when she came home and retold her being nagged at by strangers on subway, on the bus, or on a sidewalk simply because of her hijab. Again, that never happens (or has yet to happen) in winter. As long as I recollected, I have not heard her retelling any strange or awkward situations during this winter, in particular.

Hmm, has something changed in Korea? Oh, I wish it had.

When almost everyone is draped in long-sleeved, mostly dark-and grey-looking thick jackets along with their visually bulky winter headpieces, wearing a hijab in winter is almost unnoticeably similar to wearing any winter attire. And that is the simplest explanation I could get as to why no one---especially middle-aged women and men---took their time to scrutinize any unfamiliar or probably strange-looking attire like hijab worn by a Muslim woman in Korea. Within this kind of situation, I could easily spot how comfortable my wife has been whenever she walks about around Seoul---in winter! I have not seen any prying eyes or heard any muttering talks about her hijab.

From the perspective of someone who is not wearing a hijab---I could only say that that is probably the perks of wearing a hijab during winter in Korea. Again, I want to assert the fact that---so far during this winter---I have not heard my wife grumbling over any irritating situation she was tossed into; quite different from what she is bound to experience in summer.

Yup, summer has been a struggle for her. I remembered one time she recalled the time when someone intentionally approached her and asked her to remove the hijab. When almost everyone is wearing a thin, light, seemingly breathable fabrics on a hot summer day, headscarves like hijab is easily a frown upon choice of fabric or fashion.

being muslim in korea