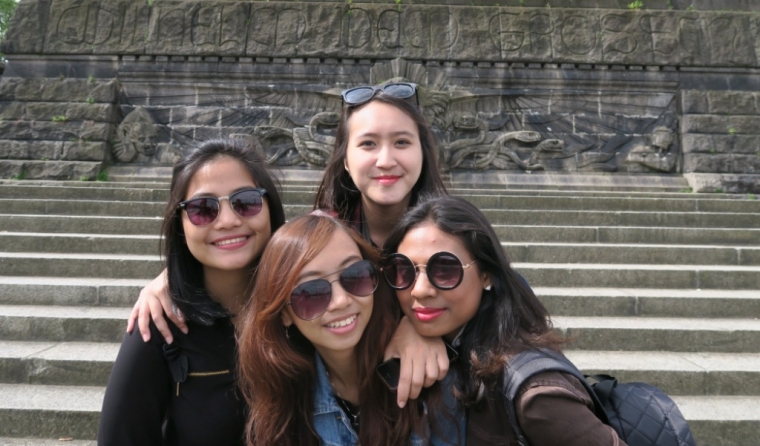 In a far away land, there will be story

“Look at the bright side!” This happened to be my favorite quote since my time here in Germany. But in many cases others don’t accept it the same way as I do and I tend to get scolded instead. Sissy (Gloria) would clearly let me know with the top of her voice saying “Are you kidding me?!” which gives me the idea that obviously we are not on the same page.

The following stories are more less about the (only) four Indonesian girls in Gelsenkirchen and their adventures. You could expect a story from a limited time of six months in Europe, a journey of an exchange student in Westfälische Hochschule, some experiences from the Erasmus+ group and few complaints about how fast our cash runs out.

In most of the occasion the word “we” was said more often than “I”. This was due to the fact that being abroad we felt much stronger being together rather than staying separated. They are like my family when I am far away from home.

But what makes my time here even more interesting is when I meet other people that share the same feelings as I do (especially as an exchange student) and have them become a part of my family too. For instance, the Erasmus+ group often makes some events like BBQ party, Bowling or little parties just to gather us up. Once we had a BBQ party in Wodanstrasse and we ended up sharing dance moves that we each learned from our home countries. While we got together at the party house, we shared out traditional dishes with each others and after dinner we usually had fun playing games. I often called for twister and the game known as werewolf.

Bowling Time with Erasmus+ Squad
By being a part of this group, you can tell that everyone has different backgrounds. Nationality is just one of the categories that could easily divided us. Yes, these cultural differences are real and they matter. It is important for us to respect each other. As a person who grew up under Indonesian philosophical foundation called Pancasila, we were taught by the motto “Bhinneka Tunggal Ika”, an old Javanese statement that means “Unity in Diversity”. We have been facing a lot of diversity in our own neighborhood. Now the context is International, more various differences that we are facing. But regardless of our differences, it does not mean we could not understand each other. In contrast, in this International environment we seek for more of what we have in common. But the way I see it, it is obvious that we all just want to have fun.

Speaking of fun, my favorite city in NRW so far has to be Köln. “Cologne”, the French version of the city’s name, is the largest city in the German federal state of North Rhine-Westphalia. The first time we visited Köln was with the company of our Indian neighbors; Anna Kavi and Anna Gowtham (No, they are not brothers), and also Hontai, an Asian-yet-American guy.

It was quite chill when we arrived there, but it did not stop us from taking loads of pictures by the Rhine and on the bridge full of love locks. We went to the famous Kölner Dom, then rode a Cable Car, roamed around the city, grabbed some beer afterwards, and ended up in a fancy restaurant to eat a delicious-yet-gigantic pork knuckles (It was seriously huge, I had to share the dish with Uni, a.k.a Rachel). It was quite an experience and it is good to have experiences like these once in a while. For some reason I learned that everyone has the same option in life, what makes it different are the choices we make. Whether or not you are a student exchange, you will be facing many options and most of them are due to the material. My suggestion, the wises thing that we could do is to maintain priority.

Fancy restaurant in koln
Köln is quite an exclusive and exotic city, but what surprise us was there was a day where we found a feeling of “home” in the middle of Köln. It was an expo, an Indonesian event called “Abdiku”. There was a line of Indonesian food (yet not sale on Indonesian cheap prices), Indonesian souvenirs and arts. Furthermore, the best part was on the evening, there were Indonesian performances such as dances, singing, music performances and musical poetry. My favorite was when the band play dangdut songs and they called all the audiences to come forward near the stage and dance together. We brought our closest Erasmus+ friends to this event, and felt a huge relieved to know that they were enjoying it too. I do not know if it was just me, but whenever I heard my home country been mentioned, my thoughts will always relate it with home. But the word “home” itself is associated with “family”, and since my parents nor brother are not here, the people that I have near me to be considered my family were these friends of mine.

From Gelsen to Koln - Abdiku
Besides Köln, there is another pretty city that we visited called Koblenz. It took three hours to drive from Gelsenkirchen to this city where our Professor lives with his family. Professor Janz invited us to stay at his comfy house with his lovely wife for three days. During our stay in Koblenz, we were introduced to another group from Juniata college, from Pennsylvania, United States, who will share the same trip with us in Koblenz and a few program in Gelsenkirchen afterward. In this trip we visited the printing museum, rode a Cable Car that costs 5€, got on a boat that goes along the Rhine for 7€ and had a Koblenz sight-seeing with a tour guide that we have to pay 5€ each. The next thing we know, we are broke, again, but it is not that I am complaining, it was all worth it. Furthermore, we did not just discover Koblenz, but we also had the chance to visit other beautiful cities nearby such as Bad Ems, Vallendar and Mainz.
HALAMAN :
LIHAT SEMUA