A queen. Considering her peculiar and odd personality as her personal charm

A Review of "Dua Garis Biru" 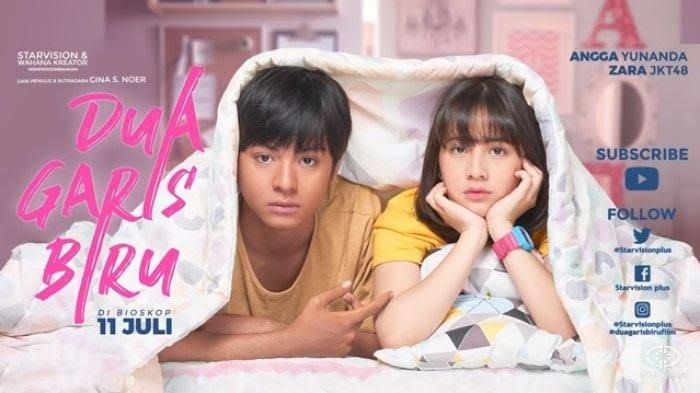 Dua Garis Biru is one of Indonesian films that deserved 8.5 rating out of 10. What makes it special is not only how they chose the perfect angle to shoot every scene and the cinematography, but also moral of the story. Every small details, each character, and the symbols they put there, were executed with excellent.

First was the story. The story told us about the consequences for unprotected sex for teenagers that resulted in unwanted pregnancy.  I think the film taught sex education in the right way: none of the scenes shown vulgarity. Thus, this is a film for teenager.

Sex is deemed taboo in Indonesia, which became the reason why we don't get sex education here. In my opinion, it is so wrong that we don't get any sex educations. Because you know what? Many people don't know what kind of consequences they are facing by having sex in a young age.

There are many cases of teen pregnancies because their lack of knowledge around sex, moreover a safe one. Some of them don't even know the function of contraception or maybe don't even care about it. Because WE DO NOT GET SEX EDUCATION AND IT IS IMPORTANT!

Let me tell you how my family approach sex education. To my parents, sex education is not taboo. My twin little brothers (they are nine years old) once asked my mom what a condom was. My mom explained to them and told me, "They would never know if we didn't tell them when they were young."

My mom also recently told me about consequences for having sex in a young age instead of just telling me not to have sex. She told me the risks I could be facing if I got pregnant: the baby could be born prematurely; the uterus could get infected; postpartum depression and more.

My mom once took me to visit the doctor. The doctor informed me that teenager's uterus was not as strong as the adult's. Therefore, pregnancy in teenager would cause double pain for the expectant mother than in adult.

As you can see, I have at least more knowledge about sex rather than other teens of my age. But, what about the others? They don't know stuff like that. They don't get education about that at school nor at home. So how they supposed to know?

A great way to tell your kids or siblings, cousins, nephews or even grandchildren about the consequences of teen pregnancy or being a teen parent is to watch this film. Because I can guarantee that this film contains everything you need to know about that.