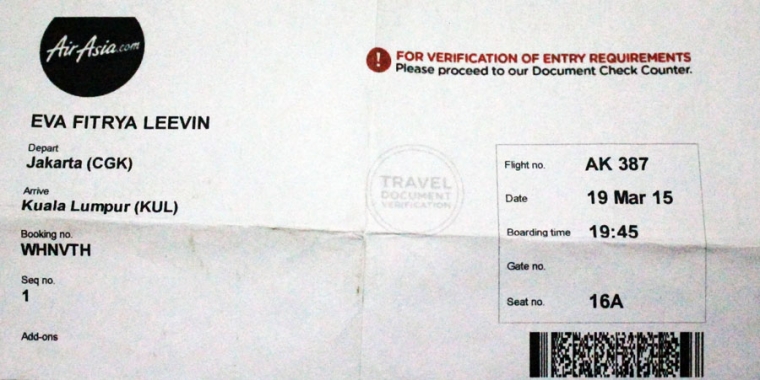 First time going abroad for Footy. Japan!!! Yup, Japan. Because there was a “Free Seat” promo from Air Asia 1 year before departure, we were very tempted to buy two tickets. At first, we thought that maybe we would spent about 7-8 days travelling in Japan. But guess what? We took 11 days travelling time. We bought tickets from Jakarta (CGK) to Osaka (KIX) on March 19th, 2015 first because we had planned to come back to Indonesia from Haneda Airport, Tokyo. So we bought those seperately (we can’t buy CGK-KIX/HND-CGK on 1 transaction only). At the end of our ticket hunting, we finally chose tickets from Haneda (HND) to Jakarta (CGK) on March 30th, 2015 because the prices on March 27-29, 2015 were unfortunately higher.

As the ticket itinerary showed, we would depart from 3rd terminal of Soekarno Hatta Airport, Jakarta to Kansai International Airport , Osaka on March 19, 2015 20.15PM and then transit in Kuala Lumpur International Airport (KLIA2) for about one hour and a half. Remember to come to airport two hours before the departure time, especially, if you don’t do web check in first in air asia website and still have a baggage with you. Also, bring along your passport and ticket. We have already done web check-in (you could do it 14 days before your departure time) and didn’t have any baggage so we just went to immigration and airline’s document checking counter directly. Show them your passport and e-boarding pass , if they ask. And here we are in the boarding room before 19.45PM.

Unluckily, Air Asia informed us there was a delay on flight from Jakarta To Kuala Lumpur for about one hour. No choices, we waited in the boarding room that were more crowded from time to time. After about one hour, the plane was ready to fly.

On the plane, everything was great. The stewards and stewardess were kind, seats were comfortable eventhough this was a low cost carrier and the journey were quite smooth. No extreme manuvere, no weather problem eventhough we flew at night. The problem started after we landed in Kuala Lumpur International Airport (KLIA2). Kuala Lumpur is GMT+8, one hour faster than Jakarta (GMT+7). Normally the transit time was 90 minutes as the schedule should be before the delayed time. We had a little chat with a woman that sat next to Footy. Her friends then joined us too. We got pretty suprised to know that their staying time in Japan was until April 01, 2015. Thirteen days in Japan, 3 women, backpacking style. Wow!!! But we suddenly reliazed that flight for Kuala Lumpur to Osaka wasn’t been delayed. So as we counted, the transit time was just about 30 minutes and the flight would departed on March 20, 2015 at 01.00AM. We fastened our walk and left them behind after saying goodbye. The airport is big and luxury, cafes and restaurants are all around the boarding room. Instead of heading the boarding room, we went to toilet in a hurry because people had already queuing in front of the boarding room and the announcement board wrote “Final call 12:40PM”. When we were about to fly, we saw the woman that used to sit beside Footy entered the cabin but we didn’t see the others. 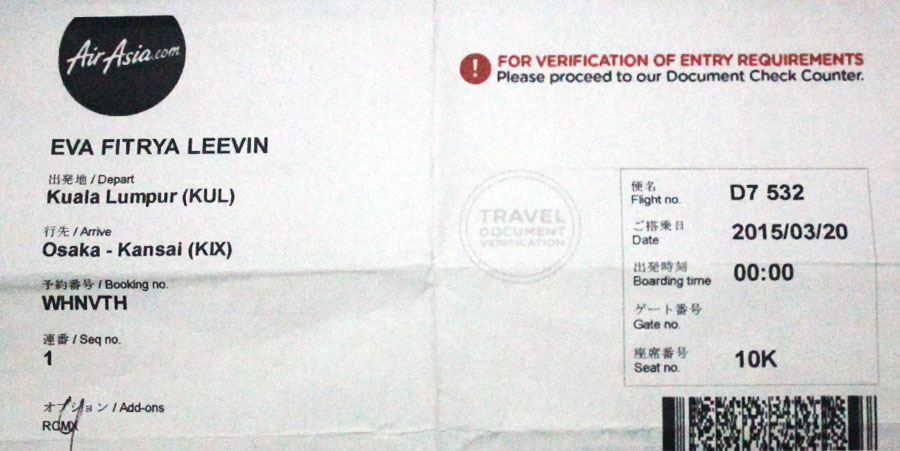 Flight KUL – KIX is operated by Air Asia Benhard X(D7) and uses Air Bus type that has a big capacity. This time, Footy sat in front of me and it wasn’t matter for us. Nothing could be seen because it’s all dark out there. If you do web check-in like we did, your seat will be picked automatically by system. You have to pay more to pick desired seat location. Inside the plane, there were a couple of Japanese sat next to Foody. The woman could speak English fluently and no lack in intonation. She sat in an aisle seat and his husband was in middle. I sat near the window.  My skill of speaking Japanese was just average so I thought it’s better for me not to try to talk to them and try to have a good sleep because we’ll have a long walk after we arrived in Osaka.

Eating time!!!! Meals that we ordered, roasted chicken with cranberry sauce (you can purchased meal before or on board, it was quite efficient rather if you must buy some Malaysian Ringgits just to buy meal) was served in a very big portion at 03.00AM. The Japanese couple was still awake and ordered a cup of tea. Feeling embrasssed, I was about to talk “I will eat” to them but I felt it would be a kind of strange so I just kept my mouth shut. When it was about 05.00AM, a stewardess asked once again whether there was passenggers that has ordered meals and not yet been served. Arghhh!!!! If we knew that it could be served at 05.00AM, we surely get it at this time. (Write in a note. Next time, you’ll know it. Hahahaha)

Based on the flight schedule, this plane would arrived in Kansai International Airport on March 20, 2015 08.25AM. I thought that “ Maybe it’s just a kind of waste if I go to Japan but not trying to improve and have a talk with a Japanese. Maybe it’s my fortune that Japanese couple sat beside me. Besides, they could speak English too” so I convinced myself to start a conversation. They were quite surprised to know that I could speak Japanese after about 4 hours sat beside me. They were tourists from Osaka that travelled to Malaysia for holiday and leisure. The old man is about 60 years old and still, Japanese looks healthy. He even explained to me where Hokkaido, Osaka, Tokyo and others were located.

After the plane landed safely, I said goodbye to them, I thought that it was the end of our meeting. But no, they showed us the way to take a bus to the terminal, led our way to immigration section for foreigner. Then they went to the right side which immigration counter for Japanese was located.