Poetry That Can Build or Kill Your Character? "Dead Poets Society (1989)" 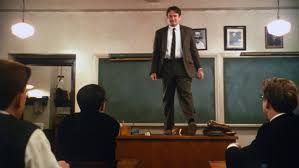 The film Dead Poets Society began airing in 1898 and was directed by Peter Weir. This film is an English film with an educational genre that can be enjoyed by students or students from Indonesia, because this film can inspire Indonesian students to make changes in their lives and invite them to be interested in poetry.

Seeing that today's enthusiasts, creators, or readers of poetry are not quite interested in it, I hope that after watching this film the students and students will be more interested in reading or writing poetry.

This film tells the story of 7 boys named Neil Perry, Todd Anderson, Knox Overstreet, Charlie Dalton, Richard Cameron, Steven Meeks, and Gerald Pitts who have just entered Welton Academy. This school is a boarding school that adheres to the principles of tradition, honor, discipline and achievement. In it there is the story of a Welton Academy teacher named Mr. Keating in 1959 who teaches his students to understand poetry as a way to express themselves and make it a reason to stay alive.

This film is a process where they (students and audiences) see the school can try to be a director and can be a character killer for ourselves. Like in the Dead Poets Society film when Neil, a student who decided to study drama rather than medicine his parents had suggested, Neil chose to commit suicide in his father's study for failing his first drama appearance at school. He thought that this was his choice which failed to please his parents.