We don't live our lives hoping to be understand by others. We just do our best to make the right choice. Catch me on: instagram: chicigrace || twitter: @chicigrace || email: chiciracetia@gmail.com 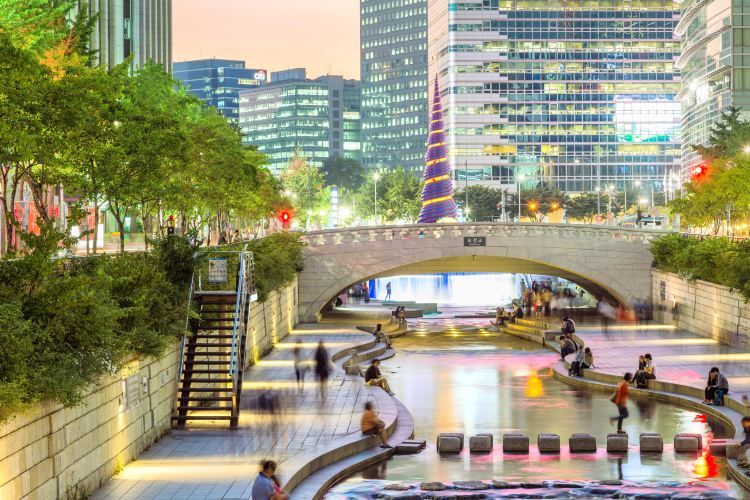 From a slum river to a green and environmentally friendly river. At first glance, maybe no one would have thought that this beautiful and shady river area has a lot of history as well as interesting facts that brought about major changes in urban planning in South Korea. Cheonggyecheon [청계천] or commonly known as Cheonggyecheon Stream, a river that stretches almost 11 km in the city of Seoul is one example of South Korea's success in improving the quality of life and environmental quality by returning the river back to its original function.

From a former flyover into a green belt area that combines four zones: history, urban, cultural, and nature. Cheonggyecheon is the beginning of the movement to revitalize the wider of Seoul City, which has benefited from eliminating the gap between the southern and northern regions of the river. The success of the Cheonggyecheon Stream restoration has had a worldwide effect. This project has become a reference for many cities and countries regarding the use of existing assets with due regard to ecology, environmental quality and urban sustainability.

Cheonggyecheon gives an answer to the controversial debate in urban planning among those who emphasize vehicle-oriented cities and those who believed cities should be more pedestrian-friendly.

The 11 km long flowing river was originally named Gaecheon (meaning open flow) after the first restoration project to build a drainage system in the Joseon Dynasty. The project also focused on dredging and strengthening river banks and building bridges, and was carried out every 2-3 years since the reign of King Taejong, the third king of the Joseon Dynasty. Then during the reign of King Yeonjo, the restoration work was carried out specifically as a national project. The name Gaecheon was renamed Cheonggyecheon (until now) when Korea was under Japanese rule. During this period, financial distress became an obstacle for The Japanese Imperial troops to cover the river flow, despite various attempts.

[Cheonggyecheon Stream when Occupied by Immigrants]/Koreabridge.net

A Picture of Past Poverty in South Korea

The Cheonggyecheon Stream is a residential area for immigrants who want to try their luck in the capital city. After the Korean War (1950 - 1953), many immigrants who migrated to Seoul to earned money and stayed along the river in shabby temporary houses, even the river flow was used by residents as landfills, this made the river polluted and gave off an unpleasant odor. This condition is exacerbated by the large amount of garbage, sand, and waste along the river that spoils the city view making the face of Seoul City even worse.

From Rivers to Flyover