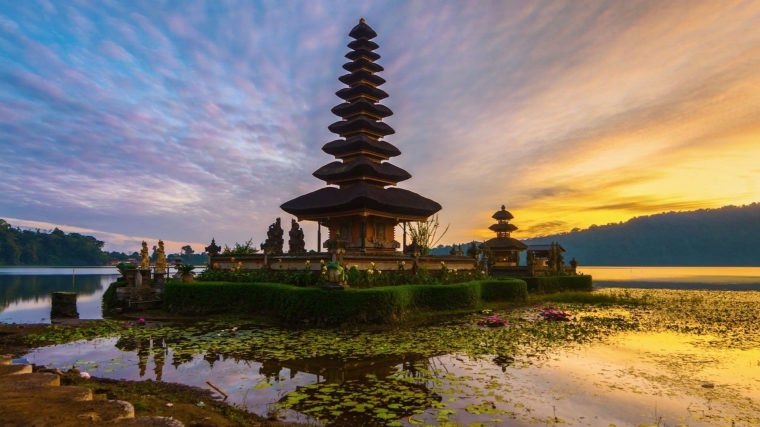 In Indonesia, especially in Java island, many buildings are found in the style of Hindu and Buddhist architecture. Because in the 8th century to the 16th is the era of the kingdoms of Hindu and Buddhist rulers. In Bali, many pavilion buildings have elaborate and detailed carving elements as a combination of Hindu-Buddhist influences and Javanese society at that time.

In the early days of Balinese architecture, there was a guidelines/principle that commonly used to construct a building, Kaja-Kelod. Kaja and Kelod have different meanings. Kaja has the meaning "facing where the mountain is" while Kelod has the meaning "facing where the sea is". This concept is commonly used for building houses or village temples. Sacred buildings, such as the Family Temple and Village Temple which are heavenly, are placed in the Kaja section and ordinary buildings, such as the House of Residence and Dalem Temple (temple relating to the grave and death), are placed in the Kelod section.

Development of Architectural Design in Bali

The golden age of Bali is in the 18th and 19th centuries. Balinese architects build the building and still maintain the nobility in creating arts that have been taught by the ancestor. Every building created by a building expert still gives a modern touch while still applying the values of the authenticity of the Balinese building.

In the 40s, European architectural style influencers were present in Balinese art. Some areas in North Bali have several houses that resemble the shape of a small mansion. In some houses, the palace, and hotels we can find the typical arches of Rome.

In the 20th century, Indonesia was free from colonialism. However, the influence of Dutch and Japanese building styles still exist in Bali. Like the Panglima House and the Presidential Palace, Tampak Siring.

Until now, the art of building in Bali still to develop with the times. And many public places appear that follow the style of other countries but still apply the art of Balinese construction. Buildings such as hotels, restaurants and public places use it.

Bali building can not be separated from the culture but culture is always related to language. And if you want to learn more about the Indonesian language. You can try to take classes at cakap.com. you do not need to busy to look for a place and time. Because on cakap.com you can determine when and where you want to study.