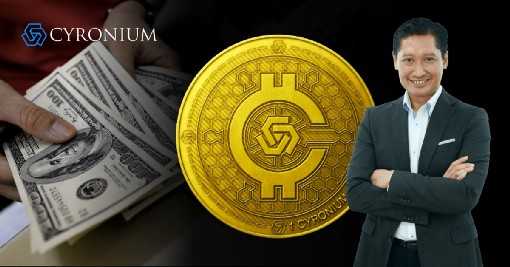 I have a simple background in the business world. I began in the world of finance as a professional banker in treasury sector from 1991 to 1996 and I entered the world of mining and industry afterward.

The first time I entered the field of limestone mine Ca CO3 which then were processed to CaOH2 calcium hydroxide. The largest calcium hydroxide plant in Southeast Asia was a supplier of raw materials of gold mining until 2004.

We sold the asset for better opportunities. In addition to supplying calcium hydroxide we also supply raw materials to the world of gold mining catalyst where the family business was established since 1996 until today. In 2009, we decided to build a gold industry to its finish product in gold purification. The raw material of our mine (ore) is bought from the people's quarry.

In addition we also have 2 KP permit for our mines in Central Kalimantan and Sangihe North Sulawesi. In 2015, we start a research, study and finally we decided to enter the digital world based on blockchain in 2017. A year later, in March 2018, cyronium was born. Cyronium is a digital asset. Cyronium is a cryptoasset. Crypto asset is a virtual / digital business derivative of a real asset.

We know very well that the current problem in the financial world is the economic dispute between the capitalists and the superpowers. Because they make regulations and restrictions for their benefit and it is time for us to reform the economic system into a more transparent and reliable world economy. Blockchain changed the "strict regulation of government and capitalist" into a decentralization and no longer centralized. It answers many of the economic sector's questions.

One of them is to answer the classic question "have you got permission from OJK?" The question answered itself, why? Because cyronium is registered in 6 countries. Cyprus, Germany, Hong Kong, Singapore, Indonesia and Albania. Then, which OJK do you mean? We do not need to continue. Does it mean cyronium become rebel huh? ha haThe strict rules from the regulator which are difficult for business people changes into an open and easy to achieve business because of the blockchain and its derivative products. That is cryptoasset.Cryptoasset as financial solutions.

In addition to the price / value of coins (such as stocks) up and down, this real business also provides dividends to the coin owner every six months. This is the standard rule. Cyronium provides 10% dividend of its global profit. At least from the increase of gold base price. Dividends are distributed every June and December every year in which they are calculated. That's another advantage of holding cyronium. Of course, there are terms and conditions, namely their cyronium must be listed in the system that will soon be described in the next chapter.

Cyronium was designed from the beginning not only as a place for financial investment, but, there is a greater mission. We will build a new economic ecosystem. Without an ecosystem, an investment will not last long.

Homosapien, for example, cannot survive if this species does not create long-term ecosystems of life liebenstraum or living areas. Homosapien was successful until now and the race was known as today's human being. We know other similar species such as homo Neanderthals, homo erectus, homo habiliis and many more who do not survive. Only homo sapiens become the modern humans today.

The similar species do not survive and they are gone now. The survival of cryptoasset is a long-term mission from the global economic ecosystem that is currently difficult to be trusted again such as a government and a capitalist government.

Today, we will be stronger with a decentralized system. The fall of big companies and the growth of small companies due to efficiency problems. We could see evidences of many companies named Kodak, lotte, mark spenser, debenham, which are shaken by local players and they are inedible to shift the market. It can be caused by the digitalization,  or the change in style, or may be because of the uniqueness of small players.