MRI (Must Read Issue) is an article program under the research and academic division of Paramadina MUN Club. This program made to accommodate ideas, reviews, and information from all club members that will be published and can be read by anyone. 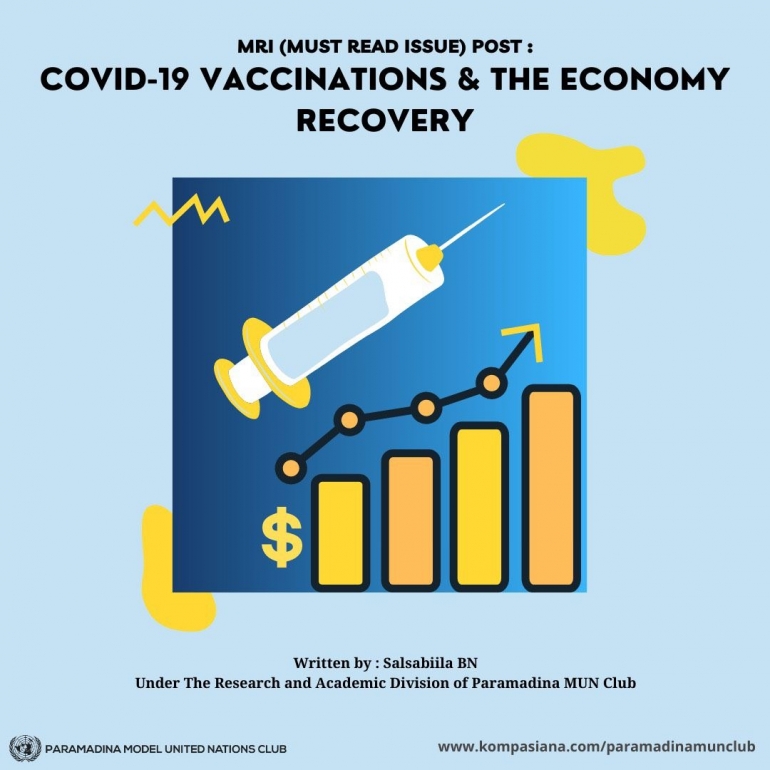 The distribution of the vaccines

Large gaps in wealth, education, and more have long divided the global economy. A pandemic might separate countries that have access to vaccines from those that don't. Many international aid organizations and some developed countries have come together and pledged that they will ensure all countries will have the tools they need to fight the pandemic, such as personal protective equipment, test kits, and vaccines.

But so far they have found it difficult to support the guarantee due to limited funds. On the other hand, as reported by the New York Times, on 18 December 2020 an agreement was made on the provision of nearly two billion doses of vaccine to low and middle-income countries by Covax leaders with pharmaceutical companies.

Earlier news about the new 3 vaccines working effectively is adequate to provide optimism about the future economic outlook. As reported from DW.com, for the Pfizer-BioNTech vaccine in averting disease from the original strain the effectiveness level was 95%, while Moderna was 94% effective, and Oxford-AstraZeneca was only 76% effective.

Nonetheless, the race between infections and injections is still far. According to The Economist, there are 5m new cases a week reported around the world. 51 countries have started giving vaccines, but only 5 countries where 5% of the population has received the first dose of vaccine. Meanwhile, one week earlier with the global dose still below 50 million, 17 million people had been vaccinated.

Could the vaccines be a sign that the economy will soon recover?

Some damage perhaps will remain until 2022, but the aggregate economy is expected to return to normal totals by the end of 2021. Data from the World Economic Forum shows that global GDP has fallen by 4.2%. With early public health interventions and government fiscal support in emerging and developing Asian economies are projected to see GDP growth of 8% in 2021.

Meanwhile, Europe is projected to have a GDP growth of 5.2% this year. And the United States at 3.1%. In addition, although some sectors may permanently weaken, changes in the economy will take other sectors to new levels. Vaccine production in various countries might help stabilize the situation but increases in jobs, consumer confidence, and a country's rate of recovery are very much dependent on how quickly the country controls the spread of the virus.

dok. IMF
As disclosed by forbes.com that projecting a simple epidemiological model into the future, vaccinations will have a significant impact if 40% of the population has been vaccinated. 40% is quite the number to catch up, although developments regarding vaccines have continued to improve so far. It is predicted that the United States will reach 40% by mid-2021. Despite the fact that straight lines in the economy are considered metaphorical.

While waiting for more good news about vaccinations, the provisional scenario is that covid-19 will drop significantly in mid-2021. This is also affected by hot weather which allows people to socialize more safely outside the home and at a distance. It is hoped that at the end of the summer, when people are comfortable with direct social interactions, there will be more business activities.