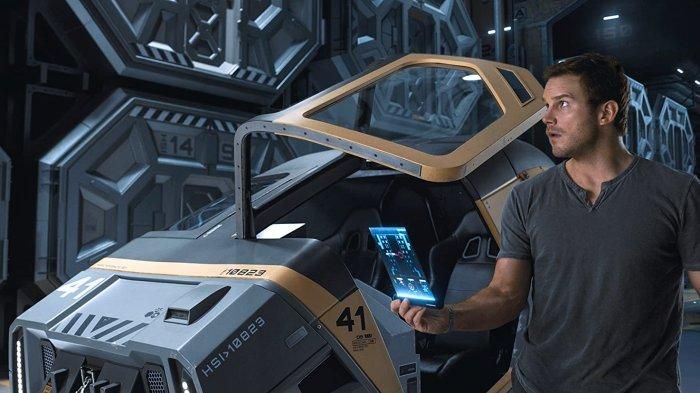 Passengers is an American science fiction, romance, and adventure film which is directed by Molten Tyldum. The Passengers film was released on December 23th, 2016 and was starred by famous artists and famous actors, such as Jennifer Lawrence, Chris Pratt, Michael Sheen, Laurence Fishburne, and Andy Garcia. Passengers film was successful to get nominations for Best Original Score and Best Production Design at the 89th Academy Awards.

This film contains technological sophistication, such as gas cylinders to store hibernating people, human-shaped robots, aircraft systems, automatic doors, automatic cellphones, and robot-like armor. The plane they were traveling on was Avalon, which is a ship that carries a lot of hibernation tube crews. The tube is equipped with very sophisticated technology, such as we can know and see the heartbeat of a person who is in it, the condition of their heart, breathing, and so much more.

This film tells the story of two people who wake up earlier than the many passengers who are still hibernating in a tube. Jim (Chris Pratt) and Aurora (Jennifer Lawrence) wake up 90 years earlier from a tube in the plane they were traveling in after going through hibernation on their way to a planet. Unfortunately, the ship they were traveling in was damaged. So, Jim had to repair the ship. Jim exits the ship using one of the most advanced technologies, namely robot-like armor equipped with a glass helmet designed with various sophistication and the armor can be used for a telephone and can pull out a rope just in case if the user falls.

However, when Jim was repairing the ship he was hit by an attack from the ship because of a technical error. Aurora came out to help him and then they successed, but Jim was unconscious. So, Aurora took him to a healing tube but Jim not breathing anymore and that's where Aurora cried because she thought Jim had died. But, after waiting for a while, Jim finally woke up and Aurora immediately hugged Jim.

Several years later, the crew of the hibernation tube was awakened automatically on the ship, and they saw a very beautiful scene inside the ship. Lots of beautiful trees and flowers. It was Jim and Aurora's doing before they left the ship.