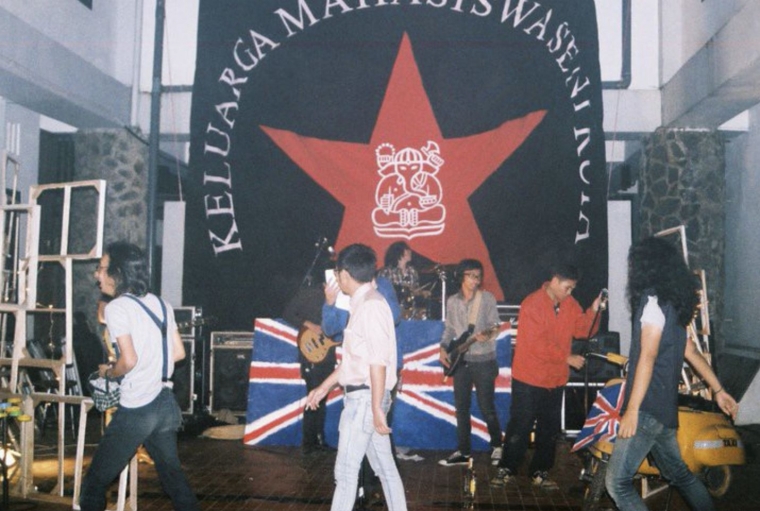 1---Comfort of The Chamber

It was 2008---a band of young kids of different and unique appearances wearing flayed jeans with high leather boots, denim & bomber jackets embedded with colourful patches of obscure ideological semantics and jargons, marched around Institut Teknologi Bandung's boulevard. They were chanting the chants of tribalistic mantras about unity in diversity, collective pride--- both spoken in overly simplified, low-resolution depictions--- and oftentimes, obscene and vulgar words spoken in their local dialect were shouted in a rather humorous manner.

When one's not a part of this particular mass, one might feel indifferent towards them, or annoyed due to the loud chants and seemingly arrogant jests and attitude radiated from the individuals in the group. The opinion and experience seem to be entirely different if one's a part of that mass. The surge of enormous pride, the undeniable feeling of belonging, and the engulfing sense of invincibility in the crowd were clearly evident in the minds of these kids. It's them against the world, they might think to themselves, ready to take on the world's malevolence, turn the tide of injustice normality, and to correct the wrongs of the world. They were the notorious KMSR group, or Keluarga Mahasiswa Seni Rupa (Visual Art Students Family).

The group's offerings of collective belonging and identity were a prime antidote to my double-minority background. I was a Peranakan descendant, and as a Christian enclaved in an overwhelmingly Islamic majority territory of Bandung, Indonesia--- a city I've just moved into with having neither relatives nor friends in it. Being a double-minority for 18 years in Indonesia back then, I knew most people around me didn't look at me with the same eyes as they look at other people--- be it positively or negatively. Unfortunately the latter was much more frequent and apparent than the other.

I thought to myself that I would be safer in the shelter of the group's identity, to have something I could be proud of and hold on, with an underlying hope that it would cover the objective fact that I wasn't exactly like the majority of people in Bandung on racial and religion grounds. It surely did me a great favour on that case, albeit slight inconveniences still came from a few unpleasant people inside that group, calling me names with no humorous context. Luckily, the overwhelming majority of the people in the group were caring, kind, and most importantly, racial and religiously colour blind. It was a place of comfort, and--- for the lack of a better term, a safe space for a lot of youngsters, especially the ones branded with a permanent minority's physical attributes like me.

As a group built on the pillars of free-thinking and creativity, it wasn't such an anomaly for KMSR to be a den filled with post-modernist movements driven by talented thinkers and creators with a plethora of unique train of thoughts and methods. It was a place where youngsters with idiosyncratic or even almost borderline autistic characters were tolerated and appreciated in contrast to the scarcity of respect these people got from other normal people in their lives before.

Unique thinking and concepts were glorified to their highest pedestal inside the group. One could witness different Olympics of Weirdness being held in these people's daily lives---be it in casual talks and banters, or even on more serious grounds like activism and artwork brainstorm sessions. It was like everyone participated in a quasi-competition of standing out, to be as weird and as free as possible in a hope of getting a reaction from their peers, whether it was laughs or respect. These particular attributes were directly reflected on the daily outfit they wore as well. It was evident that the people inside the group took pride in their visual portrayals as KMSR is the only student body at Institut Teknologi Bandung that didn't require its members to buy or wear typical uniform jackets like virtually every other faculties there, which pushed the freedom of appearance in each member even further.

2---Cracks in The Chamber

As someone who was completely enveloped by the warm hospitality of this group, combined with the fact that I was just a naive 18 years old boy, it took me long enough to realise that as diverse as this group could apparently be from the outside, there was an underlying yet undeniable policy on how the group should think and act. The policy itself was an echo chamber of attitudes that came naturally as the byproduct of positive feedback loops and invisible social control brewed inside--- a widely-known phenomenon exists not exclusively in KMSR, but practically in every other social groups, albeit with varied levels of magnitude.

The magnitude of this invisible social control in KMSR was considerably tight, which was the feasible reason why the group was solid and united, in my time, at least. However, this mechanism also came with its side effects. It caused a good number of mainstream, conservative ideas to sound foreign compared to the usual narrative of the chamber, which made these ideas were not resonating well amongst the dwellers of the chamber including me in the past. Reflecting to what I've witnessed directly, glorifying capitalism and profit was arguably the most despised amongst other ideas, and the most likely to attract social judgements if one brought it as a main concept of an artwork or activism. Then religious dogmas came on the second place. Religious people didn't really mix well with the bulk of the group, most evidently on large gatherings because as they would usually go home early, or being completely abstain. And then there were several other things the group deemed as too traditional or trivial that were collectively rejected entirely or partly, like discipline and punctuality, obedience in a hierarchy, politics, or even money--- although definitely neither as severe nor as hostile as the Evergreen State College's fiasco that happened to Bret Weinstein in March, 2017.