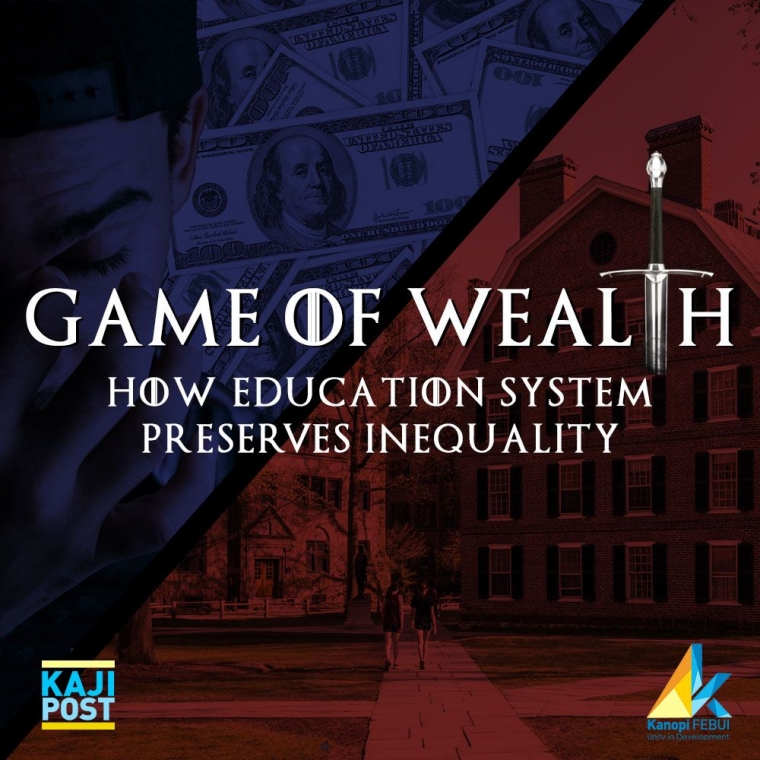 That saying has gone and echoed for generations, pressuring parents across the globe to set a standard for their kids to achieve a more successful life. As an ambition per se, this is not a bad idea in wanting their children to do better than them, but at the same time it also gives off the toxic vibe of being helicopter parents who tend to overcontrol their kids (American Psychology Association, 2018). But now, the question that arises is: is it really toxic to be helicopter parents?

The answer is no, not nowadays.

The case in which it can best describe the outcome of becoming helicopter parents might be the current college admissions scandal that has shaken the whole United States' educational system and has become a living proof on how the role in being parents is changing from a family role to a profession with children as their outputs. College admissions scandal has showed us that higher education is being valued to the point where wealthy parents are willing to pay millions of dollars so that their kids can go into the best schools. It also just doesn't stop by paying millions, but they also don't mind carrying out cunning conspiracies, like replacing athletes' faces with their kids' through photoshop. The most common reasoning behind this scandal would be those paranoid (and rich) parents are trying to guarantee the future of their kids to have at least the same level of richness. This comes at the expense of hoarding other kids' dreams, particularly those who are unable to 'pay' that much of money to participate in this fraudulent scheme. To put it into an economic standpoint, this case has something to do with preserving the wealth of the already wealthy -- in this matter, we must be familiar with the word inequality. So, what roles do inequality play in this game?

Some of you might still be wondering why it's not considered as toxic to be helicopter parents in this current society; the simple answer is because it is necessary to preserve their families' social positions which are bestowed upon them by their ancestors. High-ranked universities are believed to be the most promising medium in sealing the position off of the wealthy in the future, given the ever-increasing value of higher education, in which sometimes is seen as a long-term investment for the parents. According to Harvard Business Review, graduates who spent four years in university will earn 168% more than high school graduates. If the case is altered to not just any universities, but rather the Ivies such as Harvard University, the earnings will go at an even more sterling amount. No wonder that these parents are willing to spend as high as 1.2 million dollars to bribe their kids' way into the Ivies.

Every year, students from every high schools, both inside the U.S. and abroad, fight for their ways to get in those elite universities to the point where cram schools and pulling off an all-nighter will become their usual fashion. The problem is that those time and money you've spent on preparing for the admissions' standardized test, such SAT or ACT in the U.S., won't be valued as high if you are a middle or lower incomer. The fact is sometimes if you get rejected, it's not because you are undeserving for the position but more because of from the very start the system is just skewed against you.

Prestigious universities have the system of accepting students based on legacy -- besides accepting them through regular admissions' process that require meticulous check on individual admissions' form and test scores. Students are considered to be a part of legacy if their acceptance in the college is influenced by the history of their parents or relatives attending the same college. From 2009 to 2015, the rate of legacy students accepted in Harvard itself was nearly 34% -- five times higher than the non-legacies. Some would say that there are at least two benefits inherent with accepting legacy students. First, they can donate more money to develop the institution and second, they can be the source of diversity where they will deem to live with 'the Harvard (or insert any other elite college's name) experience' alongside those without it. The second benefit especially, is being questioned a lot as it is hard and kind of vague to determine the importance of having to preserve college's culture by means of back-lane diplomacy.  Other universities that accept more legacy students beside Harvard consist of Cornell University (22.1%), University of Chicago (19.7%), Princeton University (14%), and Yale University (11%).

It is indeed still being questioned whether donations can be a 'fair enough' reason to accept the legacy students because the meaning is pretty interchangeable with the word bribery. There is still this grey area in distinguishing between the two words since wealthy parents can just hide behind the veil of charity to bribe their kids' way into those institutions and can still be reckoned as a form of meritorious donation. But either way, giving money to certain party, whether it's donation towards the institution or bribing the exam administrator, postulate the same essence: if you possess wealth, you can buy (nearly) everything. Such capability may worsen the age-old problem of inequality.

The Root of It All: Inequality

Inequality might be the oldest problem this world ever had -- it has been here for nearly 11.000 years and still persists until this very day. United States, with Gini coefficient counted for 0.39, is not having too much of a bad day in handling income inequality problem within its society according to the number. However, income inequality has proven to spur increase in wealth inequality and in the case of the U.S., wealth inequality becomes exceptionally arising over time with the top 1% wealth share rose from 22% (1940) to 34% (2014) (World Inequality Report, 2018). Considering that wealth is more concentrated than income, if this trend is established further, those who are in the top wealth alone will eventually gain more wealth than all middle class combined in 2050. In the wake of the college admissions scandal, this too shall not be a good sign because the more concentrated the wealth is, it will be possibly harder for people to mobilize upward intergenerationally.