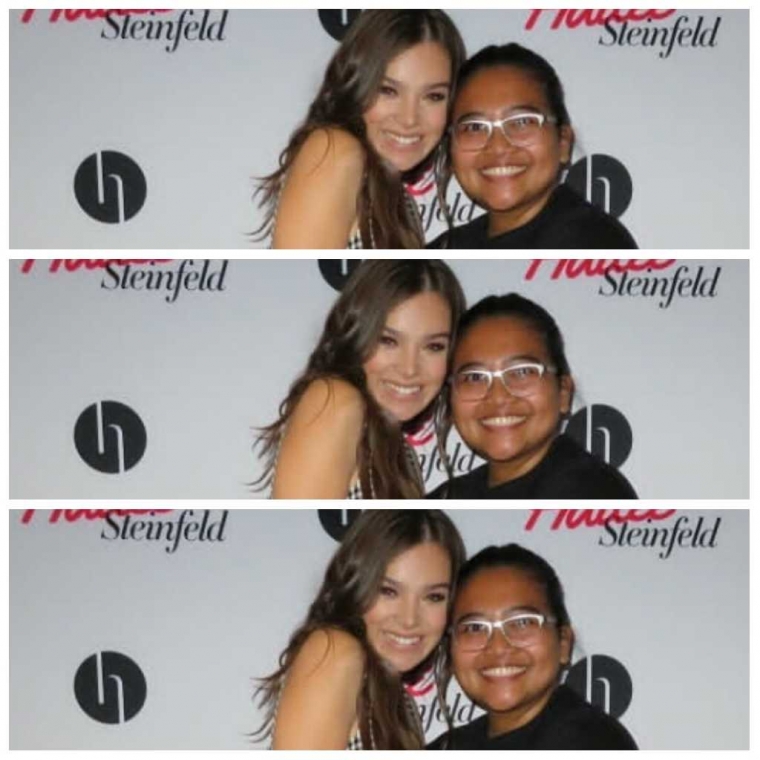 Hailee Steinfeld is a legend. Since watching her incredible role as Mattie Ross in True Grit (2011) movie, I have been knowing that she is such a special figure in Hollywood industry. She was just 14 years old when she was nominated for Best Supporting Actress in Academy Award. Then life continues easily for her.

She had roles also in several movies, naming 10.000 Saints, Romeo&Juliet, Term Life, Barely Lethal, The Homesman, The Keeping Room, 3 Days To Kill, Begin Again, Ender's Game, Edge of Seventeen, and began more famous and popular in Asia, especially in my country Indonesia, since Pitch Perfect 2. At this movie also we could see her for the very first time of her quality in singing.

I adore Hailee Steinfeld since her epic role as Mattie Ross in True Grit movie in 2011 but I am officially her fans since 2017 while I hear her songs; Love Myself, Starving, Most Girls, and Let Me Go. Then I watched Pitch Perfect 3 and I unconditionally love her. She has a nice pop voice, beautiful charisma, and also nice personality. She is never in trouble, problematic, or dramatic life like other famous persons.

In December 2017, I started to save my money to buy ticket concert of Charlie Puth's Voicenotes Tour because Hailee Steinfeld is scheduled as special opening performance. I chose Canada besides other Voicenotes Tour cities because for Indonesians are quite hard to get American Visa. Besides, I can speak French, so I think it is easier for me to go to Canada. I didn't have credit card, so that I use my bestfriend's credit card, Fitria Kurniawati Susilo. Thanks God I afford to buy VIP Meet&Greet ticket also.

In February 2018 while I was speaker in Multidisciplinary Conference of IJAS Conference in University of Malta, I got noticed from Instagram that Hailee Steinfeld would come to NET Indonesia Choice Awards 5.0 in 29 April 2018 in Sentul Convention Centre. OMG, Sentul is the place where I am daily going to my office (Indonesia Defense University).

I am so happy then I started to find Hailee fanbase in Indonesia, but I feel I am not mingled with Hailee fans because they are just knowing Hailee in music and they had handled me like a child. Based on my experience with Mariana Renata fanbase, all people are treated equally because all fans have the same human rights to meet their idol. No matter how age, professions, or experience they have. I can not find this professionalism in previous Hailee fanbase, so I made my own fanbase of Hailee Steinfeld Indonesia and everybody loves it.

In 29 April 2018 I got tickets of NET ICA 5 from my two bestfriends, Lusi Triana and Artha PPA. They love me and I love them. Well in 29 April 2018 finally I saw Hailee live performance for the very first time. I was on right side of her, not so far, but not so close, coz I was in sitting ticket, not standing ticket in the fanpit. I was so happy. I was wondering in my heart that this July I must to see Hailee in person, no matter how.

In May and June 2018 was my time for saving money for flights and visa. I got help from my bestfriend again, Fitria Kurniawati Susilo for credit card things. I love her so much. We have been bestfriends since 2009 in Miangas Island community development project of University Indonesia students.

I prepared my gifts for Haiz, consisting of Batik clothes, Batik bracelet, Batik pensil case, and also 2 (two) tshirt of my official merch with text "Woman Of Conference". I gave her the red and yellow one. Also I wrote an academic paper about "The Existence of Haiz Fanbase in Indonesia: Academic Perspective". I hope she wants to be my Co-Author. I also sent a Toronto postcard where I written that "Dear Hailee, if someday I become Indonesian president, I will invite you, your family, and management". I hope she already received all the gifts and read all of this.

In 9 July 2018, I was going to Toronto Canada for Conference and Haiz!!