Thoughts about stuff based on teeny research and personal perception. Nurturing my brain, learning my language, and sharing my interests through writing. Feedback is welcomed and highly appreciated. Beasiswa Unggulan 2017 awardee.

The Benefits of Exercising to Our Brain 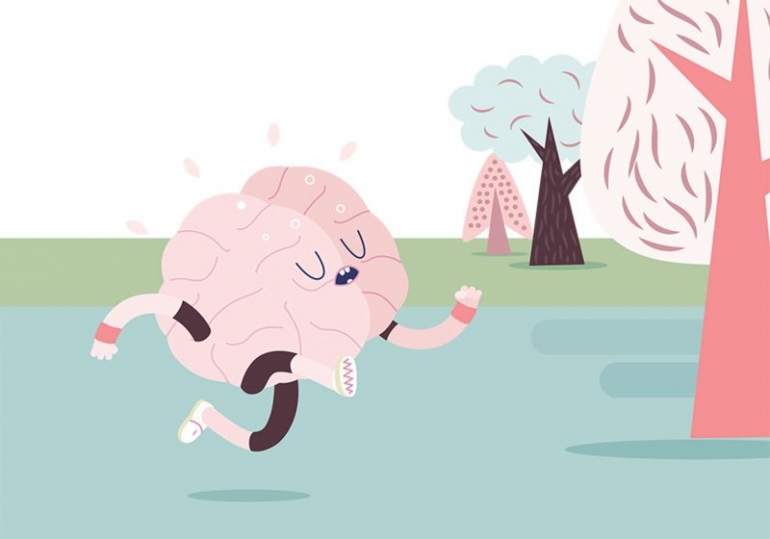 Doing exercise equals healthy body. That is the common view etched into people’s mind. With that thought in mind, exercise is associated with physical health. Trying to lose weight? Exercise. Trying to gain more muscle? Exercise. Want to have more energy and healthy heart? Exercise.

But truth is, aside from the helping our body to form a better physical fitness, exercising plays a big part in helping our brain health. Like the muscles in our body, brain grows stronger the more we train it and we can simply build a stronger brain through exercise. Is has been shown by researchers that exercise could have immediate effect on the brain by boosting memory, focus, and mood. It could also protect our brain from degenerating diseases like Depression, Alzheimer, and Dementia by making our brain grow stronger.

Researches have shown there are plenty good benefits of exercises for the brain. A study conducted in 36 healthy young adults found immediate improvements in the participants’ memory after just 10 minutes of low-intensity exercise on a stationary bike. Further testing by international research team also reported a quick light workout like short yoga or Tai Chi session was associated with heightened activity in the brain’s hippocampus. Brain scans of the participants after the light exercise revealed a stronger connection between the hippocampus and cerebral cortex which plays important role in detailed memory. These results come from labs of Michael Yassa, University of California, Irvine and Hideaki Soya, University of Tsukuba Japan.

There is also another study done in 454 older adults. These adults who undergo yearly physical exams and cognitive tests for 20 agreed to donate their brains for research when they died. The participants were then given Accelerometers which was used to track their movement and physical activity around the clock. Those who moved more scored better on memory and thinking tests, and every increase in physical activity by one standard deviation was associated with 31% lower risk of dementia.

On a TED Talk session by Wendy Suzuki, a Professor of Neural Science and Psychology in the Center for Neural Science at New York University, she explains how exercise benefits the brain. The key areas in the brain when we are discussing this topic are called Prefrontal Cortex and Hippocampus. Prefrontal Cortex is the part of the brain responsible for decision-making, focus, attention, and personality. Hippocampus is the part that is responsible for forming and retaining long-term memory. These two parts of the brain are the most susceptible to brain degenerating diseases such as Depression, Alzheimer, and Dementia. Exercising however, could help protect our brain by building a stronger brain so it would take more time for these diseases to take effect on our brain. Exercising improves our mood and helps us to focus and pay attention better that could last for 2 hours.

The brain is governed by cells called neurons and they connect to each other through neurotransmitters. The key Neurotransmitters are Dopamine, Serotonin, and Noradrenaline. Dopamine is responsible for making you motivated. Serotonin is responsible for your mood, anger, and keep your brain under control. Noradrenaline is the one responsible for your attention. Exercise instantly increase these neurotransmitters that’s why exercise could motivate you, better your mood, and focus. Exercise also boosts your learning and memory capability. In the brain there is a protein called Brain-Derived Neurotrophic Factor and it is active in the part of the brain that is responsible for long-term memory which is the hippocampus. This protein gets unleashed when we exercise helping our brain to increase its learning and memory capacity.

One of the most encouraging aspects of these studies is it suggests that all this could be achieved through light-intensity exercise, which is accessible too most people. Replacing your time sitting each day with more activity such as housework, walking, or another low intensity exercise could bring you the benefits. You can also opt for other types of activity such as dancing, swimming, biking, and gardening. The key is to get your heart to pump. As heart rate increase during exercise, the blood flow to the brain increase as well making your brain exposed to oxygen and nutrients rich blood.

The studies have shown how easily you can gain those benefits just by doing light-intensity blood pumping exercise but the effects happen only at that time and is transient. If you don’t work often then it would not have long-lasting effect. Dr. Wendy Suzuki herself had done the experiment on the class that she taught by incorporating light-intensity exercise every week and she found the students improved their reaction in their memory tasks. So, to make your brain to get the benefits frequently and to make your brain grow stronger overtime you have to exercise frequently.

Doctors recommend to stay active physically. Aim for moderate-intensity aerobic activity that increases your heart rate but realize that any physical activity can benefit your brain. If you don’t like rigorous exercise you can start simple by doing housework or walking more than usual. If you like to spice it up a little bit you can try biking, light jog around the neighborhood, or even swimming. The amount of exercises recommended varies but it sits around for 30 minutes a day 3 times a week. Aside from physical activity, it is also recommended to try mentally stimulating activity and stay socially engaged. By doing these simple light-intensity exercise you can gain more energy and motivation and it could lead you to create a healthy habit of exercising that could ultimately benefits your brain and physical fitness.