AL HAKAN JAZULI Mohon Tunggu... I want to be a nerd

Hi.. it's me Hakan, Welcome to my page 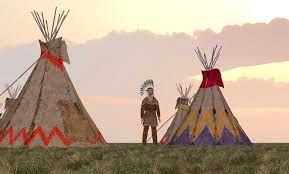 The America that greeted the first Europeans was, thus, far from an empty wilderness. It is now thought that as many people lived in the Western Hemisphere as in Western Europe  at that time – about 40 million / estimates of the number of Native Americans living in what is now the United States at the onset of European colonization range from two to 18 million , with most historians tending toward the lower figure.

What is certain is the devastating effect that European disease had on the indigenous population practically from the time of initial contact. Smallpox, in particular ravaged whole communities and is thought to have been a much more direct cause of the precipitous decline in the Indian population in the 1600s than the numerous wars with European settler.

Indian customs and culture at the time were extraordinarily diverse, as could be expected , given the expense of the land and the many different many environment to which they had adapted. Some generalizations, however, are possible. Most tribes, particularly in the wooden eastern region and the Midwest, combined aspects of hunting, gathering , and cultivation of maize and other products for their food supplies. In many cases, the women were responsible for farming and the distribution of food, while the men hunted and participated in war.

Bay all accounts, Native –American society in North America was closely tied to the land. Identification with nature and the element was integral to religious beliefs. Their life was essentially clan –oriented and communal, with children allowed more freedom and tolerance than was the European custom of the day.

Although some North American tribes developed a type of  hiero-glyphics to preserve certain texts, Native-American culture was primarily oral, with a high value placed on the recounting of tales and dreams. Clearly, there was a good deal of trade among various groups and strong evidence exists that neighboring tribes maintained extensive and formal relations –both friendly and hostile