take the risk or lose the chance 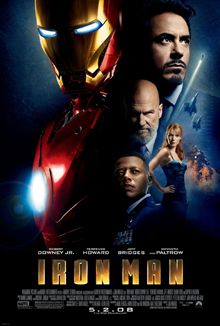 Have you ever heard that the technology of films can relate with education?. Education is the process of facilitating learning or the acquisition of knowledge, skills, values, beliefs, and habits. If you've never heard of it let me show you an example below.

Who doesn't know about this film? maybe classic but surely you know this film. Iron Man (2008) is the film stars by Robert Downey Jr. as Tony Stark / Iron Man, Terrence Howard, Jeff Bridges, Shaun Toub, and Gwyneth Paltrow. Tony Stark, who inherited defense contractor Stark Industries from his father Howard Stark. Stark was told by Lieutenant Colonel James Rhodes to demonstrate the new "Jericho" missile. After the demonstration, the convoy is ambushed and Stark is seriously injured by a missile used by the attackers. He was captured and imprisoned in a cave by a terrorist group called the Ten Rings. Yinsen, a fellow prisoner doctor, implanted an electromagnet into Stark's chest to prevent the shrapnel that injured him from reaching his heart and killing him. But, Stark and Yinsen secretly build a small, powerful electric generator called an arc reactor to power Stark's electromagnet and a prototype suit of powered armor to aid in their escape. Long story short, Stark managed to make his powerful armor and dons his new armor and flies to Afghanistan, where he saves the villagers.

What can we learn from the film is Tony Stark  did not give up on making this powerful armor and he kept trying. With his invention technology, people began researching and creating Stark's powerful armor. It also forces people to keep learning and digging up knowledge to create powerful armor similar to Stark. This technology will be very useful if it can become a reality in the future include in education. Students can improve their skills by "researching" the technology in the costume and maybe they can modify the costume which later can also be useful for many people.