Trump Ready For Against Antifa, American Have Moral 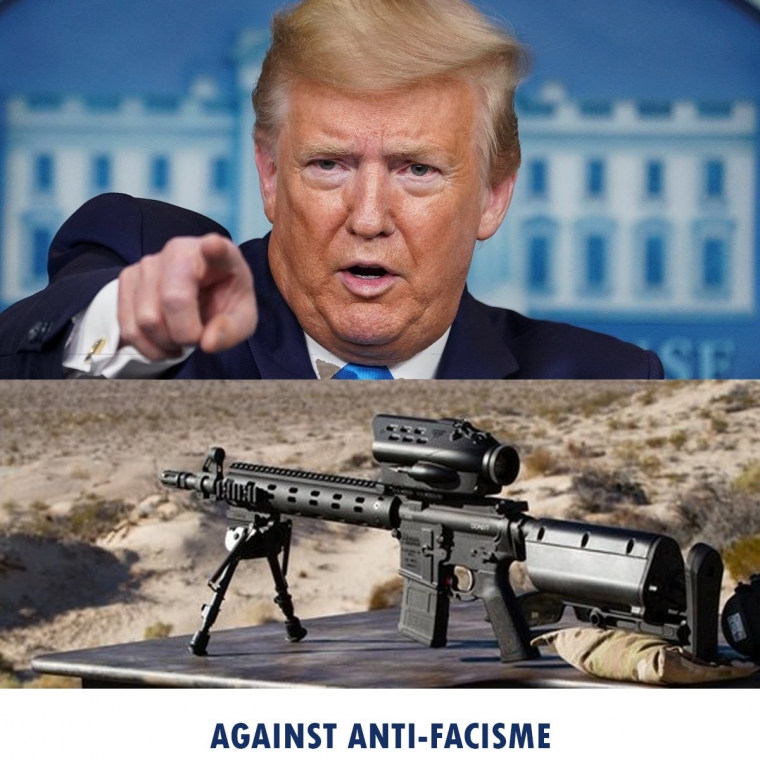 England, UK -According to Joseph S. Nye, Jr. Many Americans want to believe that we are moral and are a force for good in the world.In terms of our three-dimensional ethics, according to Truman in Joseph S. Nye, Jr's book explains that ranks first in terms of ethics in the categories of intentions, goals, and motives. Ironically, today the police's personal moral decisions are very contrary to his decisions public statements about morals.

The intention of the police is right, the target of the police is not in line with the expectations, and the motives tend to be judged to contain elements of racism because the treatment of white people is not according to procedure to black people. Inequality causes a wave of demo in black.

Derek Chauvin, a police officer from Minneapolis, committed an immoral act by holding George Floyd on his knees until he was out of breath. George Floyd died after being trampled to the knee for more than 7 minutes.

The point is that this arrest must be according to the procedure. The American people need certainty so as not to be treated like George Floyd in the possibility of using authority and police positions of authority. The Black Shirt is a warning symbol against "George Floyd".

Trump's actions were declarations of war by accusing the black race of being Antifa (anti-Fascism) as Harry Truman's decision to drop atomic bombs on Hiroshima and Nagasaki in an effort to end World War II.

To stop conflict in America, moral accountability for the people is a central part of what it means to be human before the law. Black people are extremism by the state.

President Trump said militant anti-fascist left groups were the driving force behind several riots in several cities in the United States. "That is Antifa, those are evil radical leftists. And they must be taught that they cannot do this," President Trump said.

In the war against the American people with the label Antifa (anti-Fascism) where millions of lives will be scheduled to disappear, this is a genocidal plan already there has been lost as in Japan with the number of people killed in Hiroshima and Nagasaki.

Experts agree that the deliberate destruction of so many innocent civilians can never be justified. Especially making a declaration with the concept of Civil War. Antifa, short for anti-fascists, is an amorphous movement, not an organization as Trump often says it is. Back in the spotlight for being accused of being involved in a riot of solidarity in the US.

In addition, the former internal intelligence discussion also agreed with the broad scientific consensus that Trump would create manipulative riots so as to legitimize the massacre of black race. The former intelligence chief, who was not named, said there had been allegations of unrest over the past two weeks as a very brutal conspiracy and was ridden by paid white house people.

After seeing the effect, Trump will not fight again and regret that "he does not like the idea of killing all those citizens who pay taxes to America Great Again.

Many societies have an ethical system that emphasizes impartiality and has an dialogue with the Golden Rule: "Do it to others as you want you to."

Your interests and my interests must be treated in the same way. Liberal philosopher John Rawls uses the beautiful metaphor of an imaginary ignorance of our initial relative position to describe justice as justice.

Trump as the leader of the country as well as the most respected person can teach or train today's generation of sharing affection for the minority, which is a moral image of leadership as persuasion and higher education, not just commandment exercises such as the military.

Extending moral peace and teaching the police about processes according to standards without hatred and institutions is often one of the most important moral roles the president plays.

In trying to consider ways in which their country can make the world a better place for social life in America.