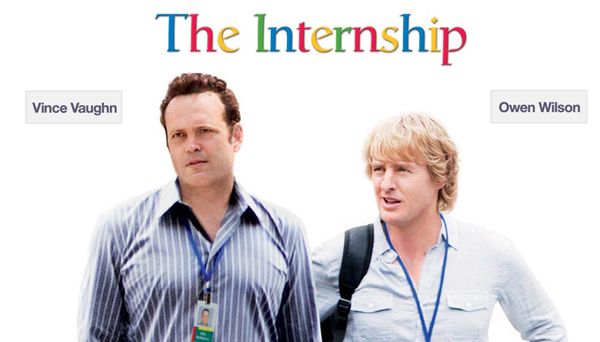 The director of the film The Intership, Shawn Levy, released in 2013, was taken from the story of Vince Vaughn.

The characters in the film The Intership consist of:

Bob Williams (The fat black person) has a big mouth and doesn't want to buy a company watch that is closed ;

Sammy is the boss of a closed watch company, the watch is out of date because time has changed because of the existence of a cellphone ;

Billy McMohan is one of the watch sellers who has been stopped because the company has closed. Billy has big dreams but doesn't do anything. Billy has a wife named Megan. Megan has been his wife for a long time but was tired of Billy's always messing things up and making people disappointed and decided to leave his house;

Nick Campbell was one of Billy's watch-selling friends who was part of the fallout from his job. Nicky's friend Jenie who supports her husband who is a great father; Kevin is the boss of a mattress company where Nick's new job is often called Kevin Tatto Thanksgiving but there wasn't one day Nick left the job because there was info from Billy who would be an intern at Google. In an internship at a technology company, you can educate yourself before the real job. Interns at google learn about google drive, google translate, google play, gmail, etc.

The process that is carried out to be able to work for Google companies comes from smart participants from various well-known universities and good at technology. To work at google you must have different thoughts. Even though Billy and Nick are the oldest people but he both have different thoughts and can go through every challenge that exists together with the final challenge that must be to find an agent to convince him to advertise his business like The pizza restaurant eventually brings Leyle's team to work for Google, which initially gets rejected and is not interested in activating advertisements with Lyle's team in the end Billy leads to a successful goal. Although different in character and age, the team brings us as if we were still in education who can work together to achieve the same goal by using increasingly advanced technology.