Ocean's 8 (2018) and Their Extraordinary Technology 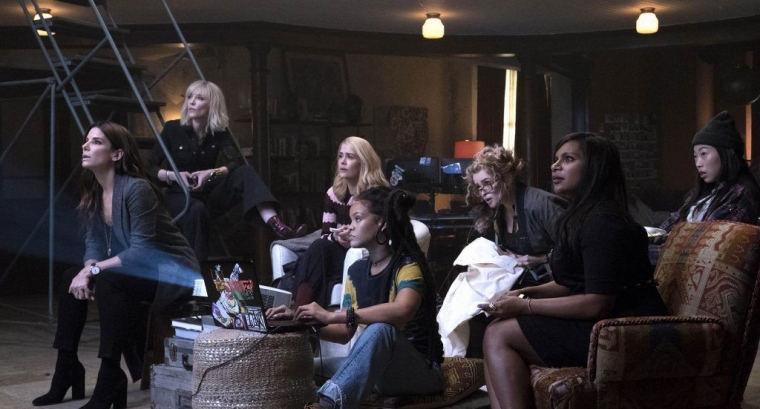 Ocean's 8 (2018) film is directed by Gary Ross and Olivia Milch, and was released on June 8, 2018. This movie tells the story of a woman named Debbie Ocean (Sandra Bullock), a  a criminal woman who recently freed from prison. Debbie has a brother named Danny Ocean, a criminal who also appeared in Ocean's 11 (2001).

So it can be said that this film is a version of a spin off from the movie ocean's Eleven. Debbie, who had been imprisoned many years, has compiled a draft of the theft of a diamond necklace that is very expensive, and then invites Lou (Cate Blanchett), her best friend to join in the plans.

Diamond necklace to be stolen is called The Toussaint costing 150 million dollars and is stolen at the annual Met Gala in New York. Debbie and Lou then recruit other members to join, including jewelry maker Amita (Mindy Kalling), the expert smuggler of goods Tammy (Sarah Paulson), a thief on the streets Constance (Awkwafina), the expert computer genius Nine Ball aka Leslie (Rihanna), fashion designer Rose Well (Helena Bonham Carter), as well as the famous artist Daphne Kluger (Anne Hathaway). They use a lot of advanced technology to carry out such a plan, for example using a variety of devices advanced computers to crack the security system in the building of the museum that will be the venue for the Met Gala in New York. Even they are able to operate a computer remotely, through internet network.

Not only that, they also use sunglasses that can take a photograph and copy the data from an object, and the data taken is then distributed through the internet. The data can be printed into an object is exactly the same with the original goods. This tool is used to copy the shape of the necklace will be stolen, then the copies are sent and printed into a necklace which is shaped exactly as the original. Throughout the film, the audience were surprised and amazed at the cleverness of each character in doing its part.

Then how is the correlation between technology in this film and education?

Don't see from the contents of this film, but see from the aspect of technology to. Currently, the era has been growing rapidly. The technology is getting advanced day by day, like for example in this film. A lot of advanced equipment as well as the ability to use a computer that is adept at making the audience amazed at the greatness of the figure. What if this technology is applied in education? Surely it will help in the development of education today, in particular Indonesia. Teaching and learning activities will necessarily be more leverage, can be done anywhere and anytime. Or, a features that facilitate learning process, such as glasses that is able to bring up video learning with the hologram, and be able to do video calls with other students and teachers. And just by redirecting the eyewear to the task that has been done, then the task of the student is automatically entered into the system the teacher to be assessed. Things like this if used properly and maximally, it will produce good results too.