Greed Is (Not) Good 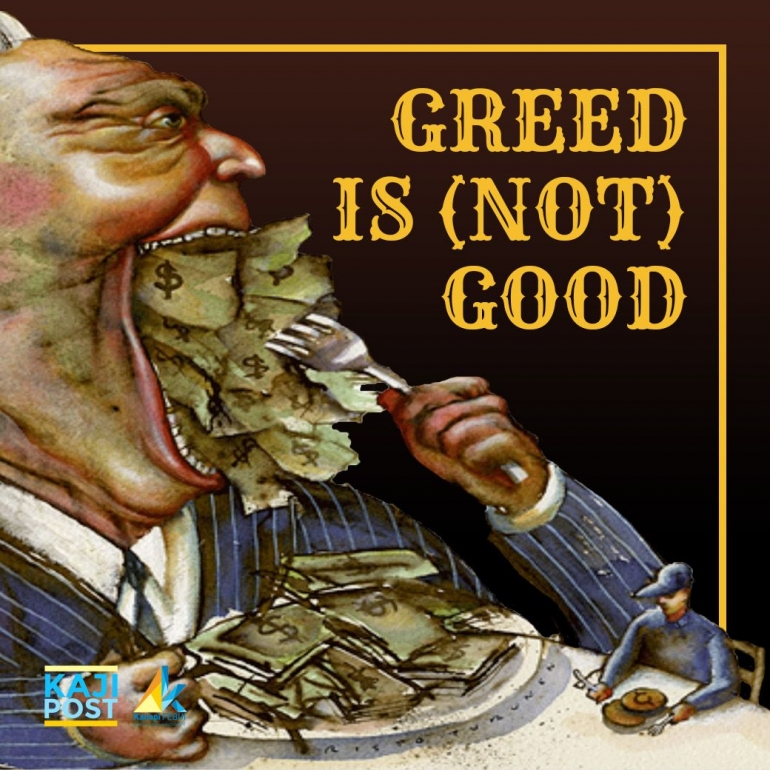 " ..greed, for lack of a better word, is good. Greed is right, greed works. Greed clarifies, cuts through, and captures the essence of the evolutionary spirit. " - Gordon Gekko, Wall Street (1987)

When one thinks of the problems our current world faces: environmental destruction, widening inequality, and exploitation of mankind, one would likely find an article relating it to the dominant economic system in the world: Capitalism. Be it the loss of 60% of wild animal population since the 1970s, the creation of greater inequality, and the justification of exploitation, one could always find an article relating them to capitalism. And when one contemplates about capitalism, one might find out about greed: one of its underlying characteristics.

From the articles above, we may see that greed clearly has brought some misery and destruction to our society and our world. However, could there be any chance that Gordon Gekko was right and that greed could bring any good to our society?

Open Up Your Eyes

To answer the question above, firstly we have to find an agreement regarding the definition of greed. In many writings, people tend to conflate greed with the pursuit of self-interest. Cambridge Dictionary defines greed as "a strong desire to continually get more of something, esp. Money." while self-interest is explained as "the act of considering the advantage to yourself when making decisions, and deciding to do what is best for you."

Homo Economicus, or the economic man, is said to be rational. He acts based on what benefits him the most. Adam Smith, in his legendary book The Wealth of Nations argues that explicitly claimed that when each members of society act based on their self-interest, the whole society would benefit.

Despite Adam Smith's being quite unimaginable, Milton Friedman exquisitely gave an example of how the act of pursuing self-interest help people around the world coordinate. He explained how literally thousands of people, who might don't know and even hate each other if they ever met, cooperate to make a single pencil. Some people in Washington had cut down a tree which made the body of the pencil, while some miners in South America mined for graphite that would act as the tip of the pencil and some businessman in Malaya produces rubber that will be used as the eraser of the pencil.

What do these economic actors have in common? None of them did even make any agreement to create a pencil. All they did was just doing their own work a.k.a making money. They were merely pursuing their personal welfare. Standing by the definition of greed as mentioned above, these actors probably were just being greedy.

Furthermore, Milton during an interview that there isn't any society that isn't greedy. Yet, in certain societies in which greed 'thrives', it could drive economic progress. As a proponent of capitalism and the free trade, Milton argues that merely any government bureaus have driven any innovations. As an example, he mentioned Einstein's theory of relativity and Henry Ford's revolution of the automobile as a success story of how greed could incentivize people to innovate and further drive economic growth. Despite criticism towards his statements, we know that this Nobel Prize winner is not stating nonsense and there are some truths behind it.

Adam Smith himself did make some clear limitations on the pursuit of self-interest. He promotes those who seek wealth creation but insisted that it must be done without violating others' needs and rights. Smith is no proponent of such people who only follow their unbridled greed to gain profit and generate wealth using any measure that doesn't benefit the society. He envisaged his idea of capitalism to be beneficial for all parties involved, so that in the end it could benefit the society. He goes as far as writing "When the happiness or misery of others depends in any respect upon our conduct, we dare not, as self-love might suggest to us, prefer the interest of one to that of many" in his book, The Theory of Moral Sentiments.

As The Time Goes By