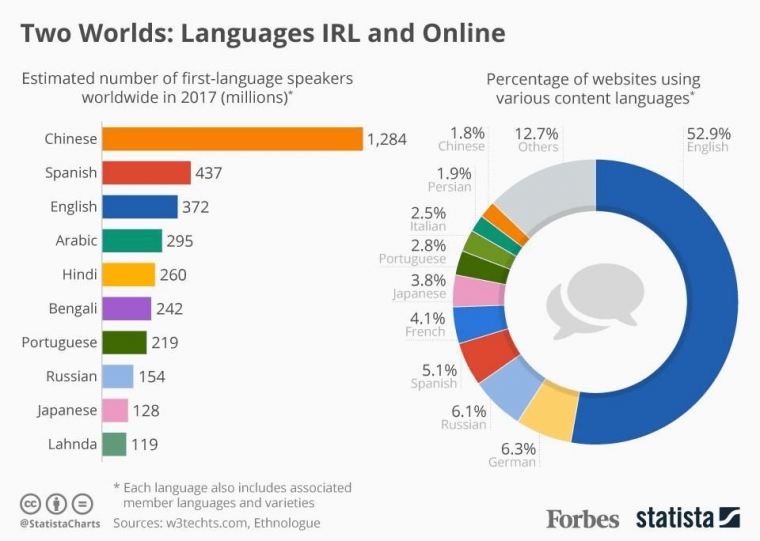 The use of languages IRL and Online (sumber: Forbes)

It is well known nowadays that Mandarin is one of the most influential and used language globally, even though English is still number one on the matter of linguistic order, the spread of Mandarin and it's use is developing each single day. It has a lot to do with the inclining of the economic power of the countries with Mandarin as it's first language such as China, Honkong, and Taiwan.

Most schools in Indonesia already implemented Mandarin lessons in their curriculum, which of course brings the question of how effective it really is, to actually teach and learn Mandarin in Indonesia.

This brings a lot of impact on the mind of our youths, speaking for myself as well, and from my personal experience. How the enterteinment industry plays a big part in the interests of students to actually learn Mandarin in a more serious pursuits.

The fact that Mandarin is globally used, is mainly affected because of economic reasons, which hasn't yet occured in the mind of young students studying in schools, they pay morea attention to the language that they interact with daily, which is their native language and one foreign language which is English. This, in my opinion is one of the main challenges to outrun in Indonesia's pursuit of a well learnt Mandarin academically.

The picture above shows the comparisons of languages being used daily in real life interactions and online interactions (including movies, musics, and other entertainment products), which we can conclude that while in real life Chinese language sits at the top of the chart, the same cannot be said for online purposes and communications, thus presenting Indonesia with the main challenge of acknowledging and being alert of how serious Mandarin language will be in the near future regarding to linguistic order, and the fact that Mandarin is a complicated language doesn't make it any easier for either students or teachers.

From my personal experience, in terms of learning Mandarin, you either go big or go home. If a student can actually comprehend how important the language is and will be in the years to come, there won't be any difficulties in making Mandarin a second well spoken foreign language in our country. Which sadly, is not the case yet so far, and implementing this mindset of how important the language can be still is a main issue in learning Mandarin itself.