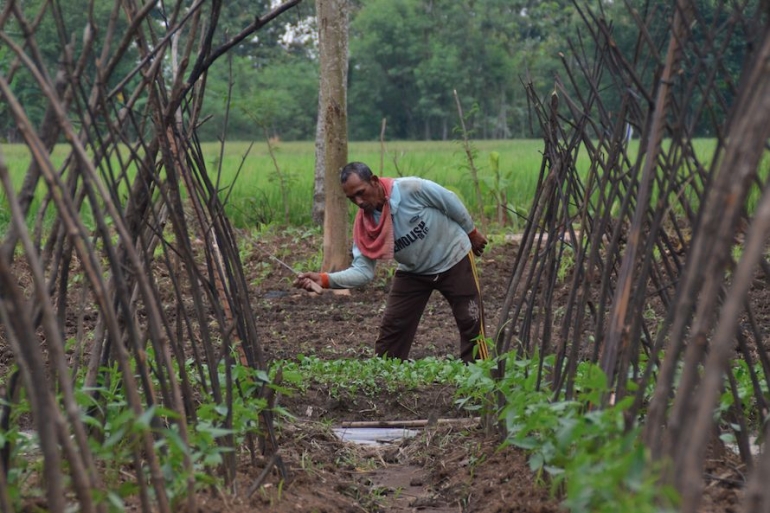 Since we were kids, we were raised to view agriculture as a job of last resort. The stigma of farmer as someone who works in dirty-soiled-clothes with little reward still stuck in one's head.

At the same time, aging farmers have become problems across the world and Indonesia is no exception. By 2050 Indonesia's population is expected to increase by 31 percent: It means that 31 years from now there will be over 322 million people demanding for more food. In order to meet those needs, agriculture production must increase by 60 percent. What makes it problematic is that Indonesia's farmers are not getting younger, with most them averaging 45-years-old or older. If this trend continues, there won't be enough people working in the farm sector in the near future.

Age is not the only factor that contributes to the reduced number of farmers. Low productivity as a result of the lack of access to farming technology and information has made many farmers choose more profitable jobs. Due to these combined factors, Indonesia has lost about 5 million farmers. If no meaningful measures are taken to address these issues, Indonesia will face insecurity and economic fall in the next decade.

As the population pressure continues to increase, agriculture and food security will have to be prioritised. In order to do so, the Government of Indonesia has intensified their efforts to empower farmers to increase their productivity. One of the efforts is the government-initiated movement called "Petani dan UMKM Indonesia Go Digital" or Indonesian Farmers and Small Business Go Digital, which was started in 2016. This movement is championing creative economy as a way to address agriculture issues in Indonesia.

According to Indonesia Agency for Creative Economy (BEKRAF), creative economy can be defined as an economic activity that leverages creativity and knowledge to boost the economy. It is a concept in which technology is harnessed in such a way by resourceful, creative individuals or groups with the aim to overcome social and economic problems. In the context of Indonesia's agriculture, creative economy is probably the best solution as it opens door for young people with relevant skills and innovative ideas to take ownership and contribute their skills and knowledges to address agriculture issues in Indonesia.

The manifestation of creative economy is evident as more and more agricultural start-ups have been established in the last five years in Indonesia---and they have played key role in reshaping the landscape of agriculture in Indonesia. For so long small-scale farmers in Indonesia have struggled to get loans from banks to grow their businesses. Most of the banks are hesitant because of the risk of low-level profitability and the lack of assets. Nowadays, farmers can get funding from many investors via iGrow. iGrow is an online platform that targets city dwellers to invest their money in seeds for an underemployed farmer in a rural area. In exchange, the investors will get regular updates on how many commodities are produced and sold, and will receive shared profits of the products sold. Since 2014 the company has helped to provide 2,200 Indonesian farmers with loans to improve the quality of their businesses and products.

Another problem that the Indonesian farmers is facing is the low education level. According to Law No.16 of 2006 on the System of Agricultural Extension, Livestock, Fisheries and Forestry, rural workers must have specific competencies to continuously improve their productivity. However, a research conducted in 2016 showed that 73.97 percent of farmers are only elementary school graduate.

There are a number of start-ups whose focus are on providing education to farmers, namely Petani, LimaKilo and TaniHub. All of them have the similar goals which is provide knowledge on farming techniques, equipment, prices, and the variety of online marketplaces to farmers so that they can improve their productivity. Another important role that these start-ups hold is that they serve as an evidence that agriculture can actually be a promising business.

Supply chain of agriculture commodities in Indonesia is very long and complex. This condition often causes damage to farmers' products, which means a financial loss for farmers. Indonesian start-up SayurBox was established with the aim to address this problem by delivering fresh products from local farmers directly to the consumers. The company ensures farmers to make a living off sustainably grown food, while providing an outlet where communities can easily purchase their products.