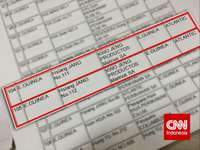 "Welcome on board hell!"

The voice was still ringing in the ears Bambang Suherman, a former realtor motorcycle Tegal. On an April morning five years ago, his life suddenly bleak when fishing along Rich 01, a ship owned by Chinese citizens.

He did not think that day he will travel around the world: across the ocean, and through various continents. Bambang, who was living far away from the sea-he could not even swim, did not suspect that will work on the ship. The story is long and painful, and originated from want he worked in a foreign country.

From Jakarta he flew to Amsterdam, then went to Trinidad. From Trinidad he reaches Port of Spain. Then he boarded a small boat to Tobago. From here, he picked up the employer, and taken out to sea. The total journey of 15 days from mainland Trinidad to Tobago, South America, up to the deck of the ship Rich 01.

'Speech' welcome to hell 'was quite surprising to me, "said the 37-year-old man told CNN Indonesia early April. Greetings, said Bambang, come from an Indonesian who had already been working on board fishing vessels it.

The ship began to move. He was still quite tired. The waters off the Atlantic ocean, fierce waves rocked hard. He was not a sailor, her stomach churned. Bambang eventually collapsed because of hangovers. At that time he felt like homecoming. But the distance is so far away.

New rested two hours, and try to sleep, a kick to wake him. Nausea and dizziness suddenly disappeared. His body was sore and pain of the blows and beatings belt. "I rebuked in Chinese, which I knew when I ordered it might work," said Bambang recalled. (See Focus: Slaves Indonesia on Foreign Ships)

Moving on from the deck of the bed of the crew, he did not finish junior high school was re-met with the penyapanya in the bow of the ship: Edi Siswanto, Sanang and Dober. Those crew members from Indonesia, and already more than a year before work. Because've never been to sea, Bambang was confused. In the middle dizziness hold drunk, he helped as best he could, pull the thread fishing line with all his strength.

"The first day I worked from 12 pm to the next morning, only got two hours of sleep and then kicked to work again," he said. "I think maybe this is just the beginning of work on the ship hell."

But the work was indeed quite heavy. He pulls the thread fishing line nearly 20 hours a day. Hands smooth as a broker seriously injured motorcycle now cut the strings. "Waking up after two hours of sleep, my hand suddenly rigid. To scoop out the white rice was not able to. I could only cry, "said the powerfully built man.