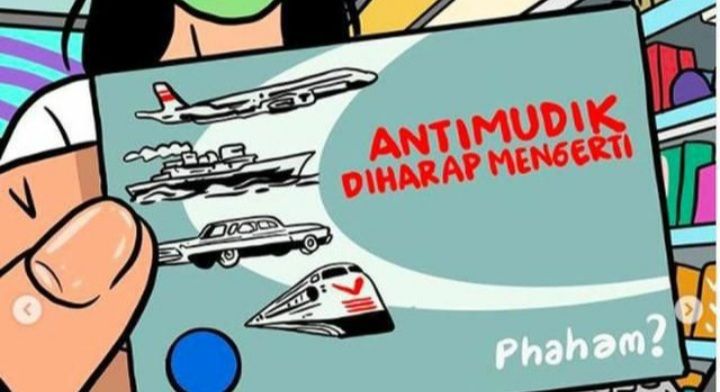 Eid homecoming is the moment most eagerly awaited by Muslims throughout Indonesia to stay in touch and gather to celebrate Eid with their families.  Unfortunately, for Eid in 2020, the Indonesian government banned Eid homecoming due to the COVID-19 pandemic so that many people hoped that in 2021 the ban on going home would be abolished and they could celebrate Eid this year with their families. However, unexpectedly all these hopes have disappeared.

The government officially re-issued a policy to prohibit Eid 2021 homecoming activities from May 6 to May 17, 2021. All modes of transportation are prohibited from operating on that date.  This is not without reason that the policy was eventually re-issued, although it is natural that the ban has brought its own disappointments to those who want to return to their hometowns and spend time with their beloved families. However, behind all that, there are also positive and negative impacts of this policy, and how do we as a society respond to this policy? Let's scroll down!

Based on data from the Covid-19 Task Force published by Kemenkopmk.go.id, last year's Idul Fitri holiday has resulted in an increase in the average number of daily cases by 68-93% with the addition of 413-559 daily cases and the number of weekly cases ranging from 2,889-3,917.

Meanwhile, the weekly mortality rate is between 28-66% or 61-143 cases of death. According to the Coordinating Minister for Human Development and Culture (Menko PMK) Muhadjir Effendy stated the high rate of transmission and death of people and health workers due to the Covid-19 outbreak was caused after several long holidays, especially after the Christmas and New Year holidays.

Meanwhile, Minister of Health Budi Gunadi Sadikin also stated that every vacation there was always an increase in Covid-19 cases between 30-50%, both from confirmed positive cases and active cases of Covid-19. In fact, the impact of the increase in cases during the Christmas and New Year holidays, the number of active Covid-19 cases is still increasing. Based on that reason and to control the spread of COVID-19 cases, the government re-issued a policy to prohibit the homecoming for Idul Fitri 1442 H, which is valid for 12 days, from 6-17 May 2021.

And the second positive impact is that the existence of this homecoming prohibition policy can reduce the number of traffic accidents during homecoming. The number of people who want to go home is estimated to have a peak of two or three days before the Eid. At almost the same time tens of millions of people went home using motorbikes, cars, public transportation (buses) and trains, as well as airplanes and ships. Therefore, from year to year the number of accidents continues to increase. With this policy, it can also be proven by the decrease in the number of accidents during the Eid holiday last year.

Everything that has a positive impact will always have a negative impact, as well as this policy. The most negative impact of this policy is on the economic sector. Reported by Theconversation.com, based on Researcher of the Institute for Development of Economics and Finance (INDEF), Bhima Yudhistira Adhinegara said that in a normal situation, the growth of money in circulation during Eid homecoming can increase by more than 10% than usual. In 2019 before the pandemic, the Ministry of Transportation estimated that the circulation of money during homecoming would reach IDR 10 trillion.

Bhima added that the retail sector sales also increased by an average of 30% higher than the usual month. The increase in transactions will make entrepreneurs recruit additional employees, for example at souvenir centers, restaurants and hotels and even transportation during the Eid al-Fitr holiday moments. With homecoming ban policy, the money circulation will be reduced and retail sales will be as usual.

On the other hand, Muhamad Rifki Fadilah, a researcher from The Indonesian Institute, added that homecoming ban policy will have an impact on the economy in the region.  He said that going homecoming for community has a multiplier effect on economic sectors in the region, such as hotels, tourist attractions, and places for souvenirs.